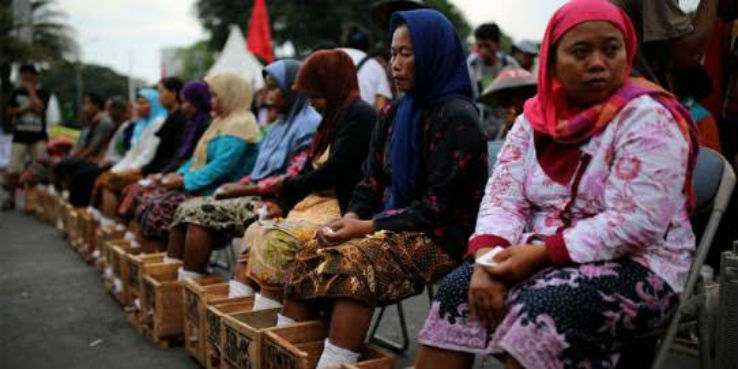 According to the Legal Aid Institute Foundation (YLBHI), Bu Patmi, 48, died on her way from the YLBHI office, where the protesters were being accommodated, to the nearby Saint Carolus Hospital at 2:45 a.m. on March 22, 2017 (source: Jakarta Post). It was shocking news for Indonesian human rights defenders everywhere and the question of ‘why’ will remain as inspiration to keep the “light on” through their struggle.

Protests against the Indonesian Government

Bu Patmi was one among 50 farmers who cemented their feet in concrete blocks in front of President Joko Widodo’s palace. She was one of the front liners since 2014, who were active in protests lasting over 30 days in front of the Central Java Governor’s office, after walking with 300 other farmers for 122 kilometres over 3 days and had been heartily permitted by her son and daughter to defend Ibu Bumi (Mother Earth). The protestors wanted people to take notice of their plight, which involves the establishment of the cement making factory, PT Semen Indonesia.

The farmers took their plight to court and the Supreme Court granted their file to prevent the state-owned factory from being built in their area. As the highest level of judicial decision-making, the Governor was requested and obliged to respect the judicial decision. Farmers regard the factory as an ecological threat, however, they did not foresee how the judicial process and complicated rule of law and principles would also further complicate the issue. Inconsistence in the law and the Supreme Court pushed farmers to decide to ask for the President’s attention and support.

The passing of Bu Patmi, who Rest in Pride, should be taken as a (hurtful) learning for all, particularly in the effort to encourage companies to respect human rights. Back in 2005, the UN Commission on Human Rights adopted resolution E/CN.4/RES/2005/69 and further organized under the UN Framework the following three pillars: The State Duty to Protect Human Rights, the Corporate Responsibility to Respect Human Rights and the Need for Greater Access to Remedy for Victims of Business-related Abuses. These Guiding Principles highlight what steps States should take to foster business’ respect for human rights, to provide a blueprint for companies to know and show that they respect human rights, and to reduce the risk of causing or contributing to human rights harm. They constitute a set of benchmarks for stakeholders to assess business’ respect for human rights.

The question of the nature of State-Owned Enterprises (SOE) must be answered. SOE’s are corporations and they must also respect human rights and the UNGP. As the owner of these entities, the State should enact two fixed roles with their enterprises. Firstly, they should be the model and be the leading example of human rights protection and secondly, they should be a promoter for corporations to respect human rights. The Government must remember that they are economic actors and urge states to recognize its closest allies: State-Owned Enterprises (SOE).

The Ministry of State Enterprises said it has submitted the roadmap for state-owned companies (BUMN) for the 2015 to 2019 period to President Joko Widodo (source: Antara News). The BUMN road map has been adjusted in accordance with the Nawacita (nine goals) program of the government of President Joko Widodo (Jokowi) and Vice President Jusuf Kalla, which prioritizes the synergy and downstream industrialization program to make SOE’s/BUMN an agent of development and to create corporate added value.

Until now, the public hasn’t heard approval from the President about the SOE roadmap; however, there should be an urgent call to adopt the UNGP on Business and Human Rights. Further, it should also consider how a company’s responsibility cannot merely be shown by the number of corporate social responsibility grants or funding given to the community. The principles for companies to respect human rights can be inspired by their commitment to respecting the rule of law.

In international law, both ICCPR (International Covenant on Civil and Political Rights) and ICESCR (International Covenant on Economic, Social and Cultural Rights) have defined the fundamental rights. However, it should be clear that information regarding natural resources is limited. The legal obligation of state and non-state actors in the field of natural resources is not clearly pointed out by these covenants and the UNGP is the most important source which explains the duties of these actors in the field of natural resources explicitly. Although admittedly, the UNGP is considered a “soft-law”, the Rule of Human Rights Protection number 39 Year 1999 in Indonesia, which states that human rights acknowledgement, respect and protection is a State (with government) and community duty, without mentioning that companies must also respect human rights (as a duty bearer), is “softer” than the UNGP.

The absence of a hard-law for human rights protection by States and Companies in many countries – I believe – is not the underlying motive to underestimating human rights principles in business practices, but to show the State leadership’s willingness to give proof and examples of good business ethics and behavioural actions.

Bu Patmi has passed and Rest in Pride, but the Kendeng case should be commemorated and the condolences of integrity of justice must end. The State-Owned Enterprises need to walk on stage, not as human rights violators, but as human rights defenders. Without examples, companies will continue doing their business as usual and in the end, the profit is for the business itself; the profit shares are proud income but the taste is one of shame.