Africa embraces the digital revolution. The continent didn’t expand landline telephony, it embraced the mobile phone network straightaway. Also ‘traditional’ bank accounts didn’t come off the ground, as mobile banking made its appearance. Africa faces a golden opportunity in this respect, due to the convergence of new technologies that transform agriculture, in combination with the arising of startups. Which chances are there for the future of youth and the food security of Africa? 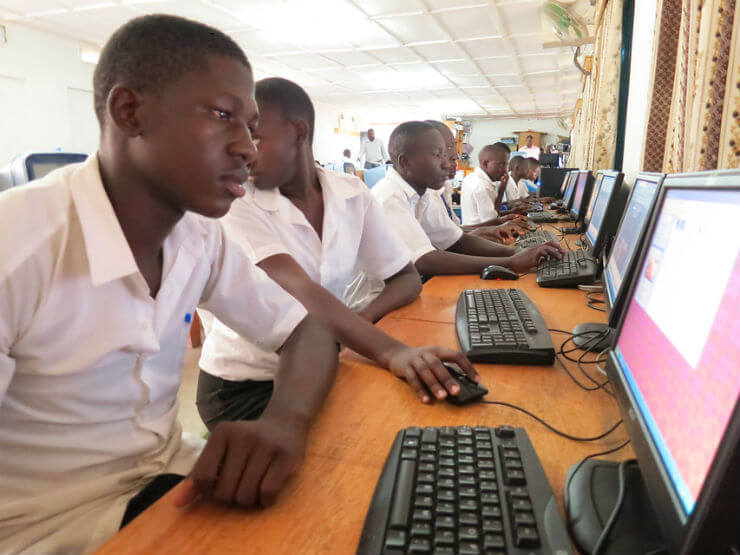 The digital revolution is booming in Africa. In 2016, two third of the population in Sub-Sahara Africa had a mobile phone. With regards to the number of smartphone connections the biggest growth is expected in Africa. There were 226 million connections in 2015 in Africa, and it’s expected that there will be more than 700 million in 2020. Besides, Africa has seen the fastest growth rates in internet penetration, with the number of internet users across the continent increasing by more than 20% compared to 2017. The following map is interesting in this respect, in which you can see that in some countries people do have a mobile phone but they don’t have access to electricity (and people charge their phone with a solar power bank).

The growing African IT-sector also shows that the digital revolution is booming.
In Nairobi, the capital of Kenya, there are several innovation hubs where startups arise. Like Konza City what is supposed to be the counterpart of Silicon Valley: Silicon Savannah. Or iHub, a community of innovators and impact investors of more than 10,000 people which is constantly growing.
More and more innovative products arise from this, for example the 3DAgDev project. 3DAgDev uses 3D printing to provide women smallholder farmers in Africa with the technology to ‘design and develop their own labor-saving agricultural tools’ whereby ‘local tool manufacturers can copy plastic prototypes and develop their own modifications’. Ultimately, these new technologies are making manufacturing simpler. They allow countries and entrepreneurs to focus on the business side. It will be the demands of consumers that determine Africa’s industrialization. And here things are looking up: the middle class is rising; and the entrepreneurial startup scene is booming like never before (cf. between 2012 and 2018, there was a ten-fold increase in the amount of venture capital flowing into African tech startups).

The question is now: how can we use this digital revolution to make agriculture also attractive for youth?
Making agriculture attractive for youth is important because today the average age of African farmers is 60, while half of Africa’s population is under the age of 25 and has a negative perception about the prospect of becoming a (marginalized) farmer like their parents. Furthermore, the population will increase by half a million fifteen year-olds every year up to 2035. As a result, 18 million new jobs are needed each year to provide work for the growing group of young people. A huge opportunity lies in agriculture, not only because Africa’s agricultural sector has enormous untapped potential, but it is also very much needed to secure the food security of the continent in the future, especially in sub-Saharan Africa.

Bringing the digital revolution to agriculture

What we therefore need is a roll out of the digital revolution in the agriculture. How? To reap the most benefits from the convergence of new technology and resurgent entrepreneurship, African governments, INGOs and impact investors should focus on six essential strategic areas:

A flourishing farming sector will invest in technological innovation and infrastructure, will stimulate the development of high-quality vocational training and create new jobs. It will also be an incentive for the African processing industry to grow, where there are still plenty of opportunities for adding value to export products and products for local markets. In other words: the convergence of the digital revolution and agribusinesses can work as a catalyst for economic growth, thereby creating jobs and business opportunities for youth. See for instance GrowthAfrica, which has created 25,000 jobs, 54,000 income generating opportunities and 289 entrepreneurs predominantly in the agriculture, energy/greentech and fintech sectors since 2002.

In this forward-looking narrative on Africa’s development, ICCO’s focus is to ensure that also resource-poor farming communities, especially youth, can access new digital technologies. As disruptive as technologies can be for business models and industries,  they can also be transformative when used as a lever to enhancing the productivity and quality of the produce of smallholder farmers. For example in ICCO’s G4AW projects, we make farm management information services (based on the use of satellite data) available via SMS and app, so that farmers can improve the performance of their farming activities. Also some other applications, such as the transport-to-market service ‘LOOP’ and the fintech-application for MFI’s (used in STARS) are good examples. They illustrate how ICCO and its development partners are unlocking the opportunities offered by the digital revolution for the current and next generation smallholder farmers. Because that is what these new technologies can also bring: making farming attractive again.

Digital technology and the use of mobile phones is rapidly transforming the world and so also guiding the lives of the African youth. Youth are in general more attracted to everything which has to do with digitalization than older people. Also the adoption rates of new technologies are much higher among youth.They have an insatiable appetite for knowledge on new technology.
In other words, if smallholder-led agriculture doesn’t embrace the digital revolution, youth won’t be attracted to it and they will seek their economic and social prosperity somewhere else. Considering the average age of the current generation farmers, this will create a gloomy perspective on world food security.