The holiday Gena (Ethiopian Christmas) is only two weeks ahead. And, as in many of Ethiopian holidays, meat is the main dish for festivity. The timing was perfect for Mrs. Mulu Alazar and many other farmers who have been fattening their oxen in Dembecha, a small town in northeastern Ethiopia, and surrounding Woredas 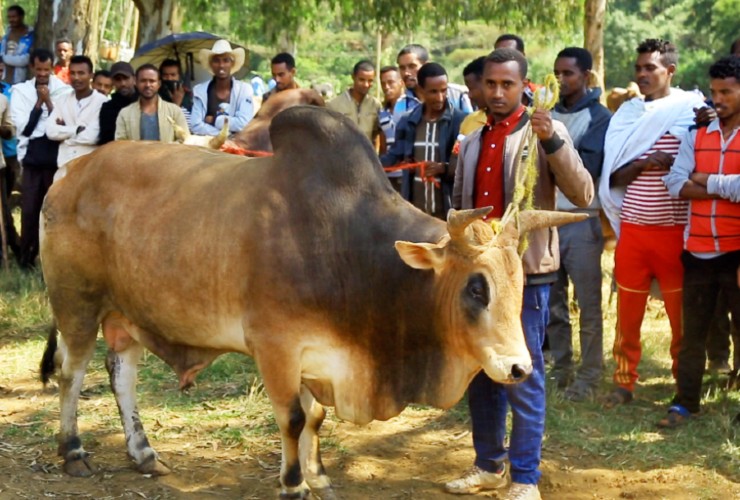 On December 24, 2019, SAFE Project and the Dembecha Woreda Livestock Resource Development Office jointly organized a “Cattle Fattening Fair”. Hundreds of oxen well fattened for the Gena holiday came out in the field. Local butchery owners, restaurant managers, localities who plan to jointly slaughter an ox for the holiday, traders who supply even to Addis Ababa, government officials, livestock experts, and many more stakeholders attended the fair.

Mulu Alazar (photo) is “Areqea Awutita”, a person who distills the local alcohol drink called “Areqea” for sale. In fact, the area is mostly known for its Areqea production, and “Dembecha” has long become a distinguished “Brand” allover Ethiopia. However, Mulu said, the income is not fulfilling. That is why she has been engaging in fattening, to earn an extra income.

SAFE Project, with the Woreda Office and other stakeholders, supports the fatteners by providing trainings and facilitating access to finance. “With regard to training, I can say we have almost addressed the demand in all categories in all the three Kebeles where SAFE Project is operating”, said Dr. Dagnachew Mulat, Head of Dembecha Woreda Livestock Office.

The objective of organizing this cattle fattening fair was to promote the increasingly extensive fattening practice in Dembecha and neighboring Woredas and to create market linkages. Most importantly, the event was also aimed to facilitate a learning opportunity for fatteners among themselves by creating a productive competition.

During the cattle fair, a small committee consisting of livestock experts, buyers and traders were thoroughly observing and ranking the exhibited cattle based on specific criteria of proper fattening, such as:

Out of the ten best cattle selected, five of them were ranked top and their fatteners received awards of Certificate and packed veterinary medicines.

A young man, Gizachew Tenaw, was the total winner of the fattening competition.

“Most of the fatteners are youth, and we confirmed today that fattening has huge potential for creating jobs for the youth”, said Mr. Dereje Legesse, SAFE Project Manager, ICCO Cooperation.

Stakeholder meeting about challenges and opportunities

The cattle fair was followed by a stakeholders meeting where participants openly discussed the challenges and opportunities of fattening in the area. Government officials, including the Deputy Manager of the Amhara Region Livestock Resource Development Promotion Agency, led the discussion and gave responses to the questions raised by fatteners and smallholder farmers.

Farmers raised issues such as unavailability of land for fattening and insufficient professional support. Moreover, though fatteners have been receiving training on importance of concentrate feed, it was indicated in the discussion that awareness and skill in applying the necessary inputs for feed remains a challenge. The meeting helped to link all relevant stakeholders for possible solutions.

Proper fattening only takes two to three months. And a number of smallholders have gained the knowledge and experience with regard to appropriate feeding and cost recording.

Mulu Alazar encourages others to engage in fattening as she has already seen the benefit. “The message I have to “Areqea Awutitas” is to start fattening one ox in parallel. They can earn at least Birr 3,000 even at the time when the market is low.”

SAFE Project, financed by Act Church of Sweden and implemented by ICCO Cooperation, actively engages in fattening, fodder, seedling and honey value chain development and also in a number of interventions, including access to finance, market linkage and technology transfer.
The Woreda Dembecha Zuria, is one of the five Woredas which SAFE Project engages in development interventions in Amhara National Regional State.