Changing Times and Changing Ways: How Companies, NGOs and Communities Work Towards a More Sustainable Future

While driving for hours through immense palm-oil and acacia plantations in the Kampar peninsula of Riau province, it is difficult to imagine that only a few decades ago, this was all still rainforest. The peninsula is about 4 million hectares large, roughly the same size as the Netherlands, and represents 17% of the total peat area in Indonesia. 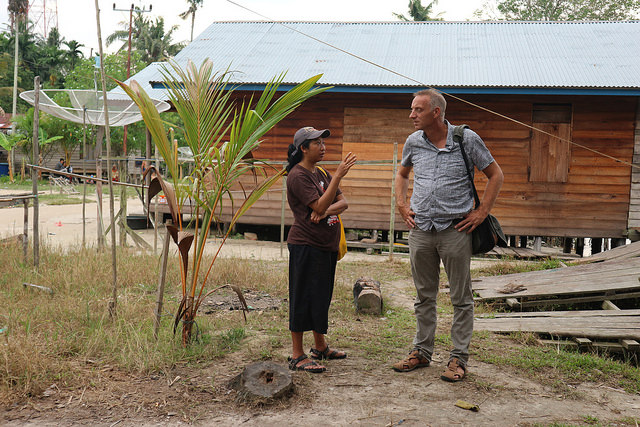 With a delegation of 30 people – mostly media, but also representatives from big plantations, GAR/Sinar Mas and APP – we visited the EU funded ASBALR PACT program. This three-year program focuses on business and human rights, particularly on alternative conflict mediation by having multi-stakeholder dialogues for sustainable alternative developments.

What was also strange was that along the roads, you hardly see any signs indicating the concession manager of the plantations. Why are companies so hesitant in displaying themselves? Even with representatives from the companies on board, entering a plantation was impossible. Apparently, they are very careful in exposing themselves. Until a few years ago, it would be highly unlikely that a trip like this could take place. Private sector partners would not engage this closely with a NGO; and still, for some companies, being in the same delegation with NGOs is a bridge too far. The third company active in this area, RAPP, did not reply to the invitation we sent but instead, sent a person who only observed and was unwilling to introduce himself to the group.

The Jokowi administration committed to a zero-deforestation pledge, banned forest fires, and issued a regulation banning planting activities in peat land areas. These actions are in line with the consumer demand – particularly from Europe and America – for sustainably produced paper and palm oil. As a result, you see that now private sector partners are actively exploring ways of how to deal with sustainability, alternative income and conflict issues. For them it is a clear business proposition, as they realize it will be good for their businesses. Whereas in the short term, they are forced by politics, as consumers demand it, they realize that in the long term they will have to produce sustainably. Conflicts are also not good for business.

Private sector partners have also become more serious about the role of media and NGOs. They avoid legal cases and negative media coverage against their products. “We don’t want any legal cases, even if we win, we still lose.’’ The public opinion is in favor of the communities, so “we have to take the role of NGOs and media seriously and try to avoid conflicts. We have to go for negotiation and mediation,” says a private sector representative. This too is new. Until a few years ago, these companies really didn’t care.

For farmers in this harsh environment, it is not easy to survive or to build a living. They must combine all kinds of different (farm) activities with other income sources. They are literally squeezed in between different concessions with not much space to farm. Moreover, the new “total ban” on fire and haze (due to huge international pressure), is giving them a hard time, as it’s the only way they know how to work their land. After a fire, the pests are gone and the ashes provide nutrients for the next crop. This is perfectly fine if practiced on a small scale and is well controlled. However, with a total ban on fire, this no longer allowed. Thus far, there is no alternative way of farming known to them.

So apparently, times are changing. As ICCO, we choose to work with companies who acknowledge this and who are open to positive change. But we also know that these changes are still very fragile. Now, these positive developments are backed up and supported by the Indonesian government, who will provide the framework for change. But what if a new government would reverse these decisions? Will the companies still – voluntarily – continue down this path? Hopefully, programs such as ASBALR PACT support them to genuinely develop in that direction.