Many farmers store their maize produce for months after harvest with the aim to sell it at the market when the price is high. But this practice often leads to deterioration of the grains due to the lack of proper post-harvest management. Another challenge is an aflatoxin-producing fungus that contaminates and destroys maize (and other crops) during harvest and storage, especially in humid storage facilities. 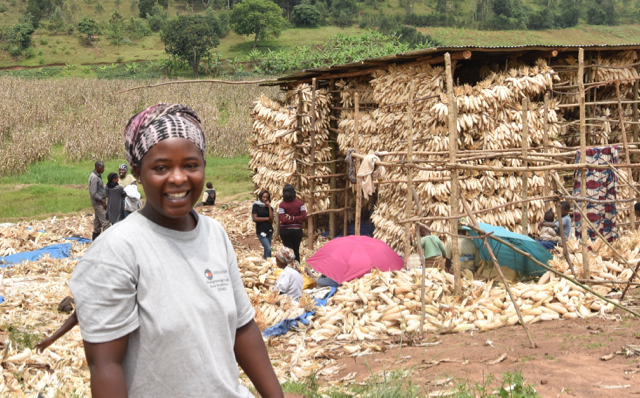 AIF imports more than 50% percent of its maize needs per year, mainly from Zambia, because Rwandan maize has high level of aflatoxins.

STARS facilitated a contractual agreement between two maize unions (UNICOPROMANYA and UCOMAKI) totalling 41 POs with more than 8,000 farmers, to support them to control aflatoxin. The POs put measures in place for controlling the aflatoxin, such as rapid drying of harvested maize to a low moisture content (less than 14%) using drying sheds, which reduces the risk of fungus growth.

To help farmers access the necessary equipment for storage management, STARS in partnership with MFIs developed agri-loan products for maize farmers. Thanks to these loans over 15,000 POs were able to access capital and build drying sheds.

Chrystome is a president of UNICOPROMANYA Union in Nyagatare district: “Drying sheds enabled me to reach 95% of aflatoxin control. Our union has now delivered 300MT to AIF and all the tests show that our maize is aflatoxin free and there is no rejection.“

“The collaboration between STARS, AIF and UNICOPROMANYA, has reduced the financial risks, and there is no longer fear to provide loans to maize farmers,” said Mr. Ndateba, branch manager of Duterimbere Microfinance- Nyagatare Branch.

“In 2016, I decided to join the producer organization in my village. STARS provided me with agricultural training on maize farming practices and post-harvest management. I also started to use the drying facilities provided by the PO. In 2017, I benefited from the agri-group loan (developed by the MFI CLECAM EJO HEZA through STARS), which I used to invest in my farm. Before 2016, I tried to diversify my farm, but never with a lot of success. Now, thanks to the loan and my knowledge on farming, I doubled my harvest and income,” Marie Jeanne Nyirandegeye, maize farmer in Kamonyi District explains.