Dance along with “Brenda Fassi”

Phassy Mmbone might be sixty years old, but when the music starts playing during the launch event of the Kakamega County Nutrition Action Plan, she starts dancing like she is still in her twenties. “People call me Brenda Fassi,” she says as she moves, “like the South African singer. She and I do not only share the name, we are also like-minded when it comes to our spirit.” 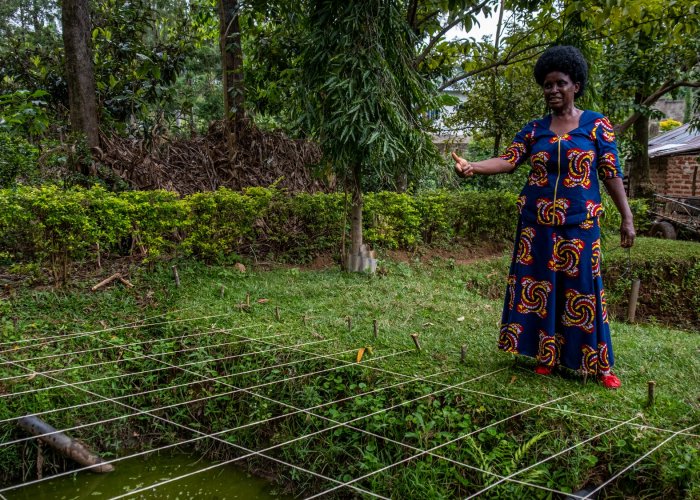 Ms. Mbone is invited because she is a farmer, and the Kakamega County Nutrition Action Plan that revolves around nutrition is very much an agricultural plan. By making sure that farmers are diversifying their crops, the county government and their partner ICCO Cooperation hope that malnutrition will be stopped. Earlier that day, we met Phassy Mbone on her land in Kakamega County, where she is the perfect example of what a ‘diversified farm’ looks like.

“On your right, you can see my goat shed, and behind it is my chicken run. On your left, you can see my catfish pond. And back there, between my farmland and us, you will see a big hole in the ground,” Ms. Mbone says when she gives us a tour of her 3-acre farm. “That’s where the fish pond for the tilapias will be. They were here before, but one of the walls broke, so I lost all my fish.”

Lost fish or not, it’s clear that Phassy Mbone doesn’t bet on just one horse. “When my crops fail me or my goats die because of a disease, I will still have other ways of earning my daily bread,” she proudly tells us. “I even have some land that I lease from someone who lives in town. You can’t see it, but that’s where I grow my soya beans. They are highly nutritious. Before, I just had sugar cane on my field, like so many others. But if the going gets tough and there is no business, one cannot eat just sugar cane”.

Ms Phassy, divorced mother of four children who already left the house to pursue their studies, hires local staff to work on her land. “Most people that work here are HIV positive. I learnt that it’s hard for them to get a job, so I hired them to work on my land.” Together with farmers group ‘Women Organisation for People Living with HIV/AIDS Ambassadors of Hope’ (WOPLAH), Phassy is working to beat malnutrition in her county.

“When I formed this group, I had to think out of the box,” Ms Mbone continues. “How could I improve the nutritional status of children, women and pregnant mothers? When someone is sick, good nutrition is the more important aspect for recovery.” But the benefits of forming WOPLAH did not end there: “we are now fully heard by the government, because we have our voices united in one group,” she says.

Ms Mbone has gotten some help from the Anglican Development Service (ADS), an organisation that is a member of the ICCO lead Civic Engagement Alliance. “I’m very grateful to them,” she explains, “because ADS trained the WOPLAH members on how to dialogue for the voice of the farmer to be heard. In any opportunity I have in my engagement with the government, I get to talk about the needs of the vulnerable and the less fortunate.”

As Phassy Mbone poses for a picture in her field, she has a hard time standing still: sometimes she just has to dance. There is much reason to be content, she says, because business is booming. “Since the last two years I feel like our voice as a network is getting stronger and more effective in influencing the government. This is extremely important, because farmers are the backbone of the nation. That is why the government has to listen to us.”

Back to the garden of the Golf Hotel in Kakamega Town, where the County Nutrition Action Plan was just presented to the press. Phassy Mbone smiles as photos are taken of all the officials. What is her hope for the future, now that this nutrition plan has launched?

The music picks up again, and “the Kenyan Brenda Fassi” can’t help herself: the dance must go on. One of the bystanders looks at her as she moves to the other dancers. “She is sixty years old? If she still dances like that now, she will live to be very old,” he says smiling.