In rural Ethiopia, women are responsible for household chores such as cooking, cleaning, raising kids, caring for sick and elderly family members while they equally share responsibilities with men on farm activities. 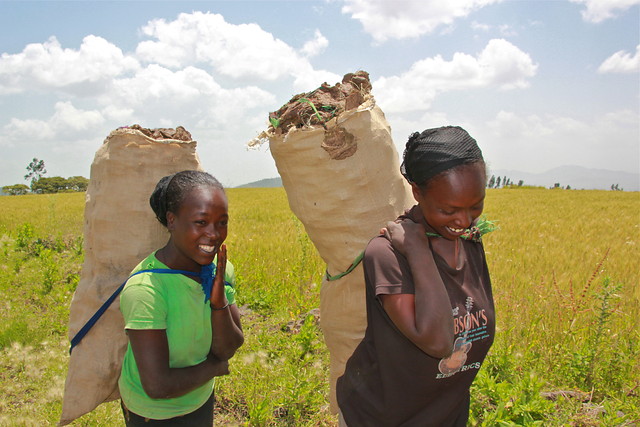 The role of women in agriculture has increased, but they are not yet decision makers, especially regarding the income from their production. In many households, women can not make decisions without the consent of the man of the house.

The Strengthening African Rural Smallholders (STARS) program of ICCO, in cooperation with Mastercard Foundation, is working to empower these Ethiopian women smallholders. In the country, STARS is targeting 76,000 rural farmers, of which 50% women.

Within POs, the capacity, contribution and commitment of members vary due to different factors. The expectations of members from POs also vary based on the production, resources and needs of members and the foreseen roles of the PO to meet those expectations.

Previous services that members received from POs have positively influenced members’ participation in meetings and PO operations. Since distribution of fertilizer, improved seeds, collective marketing and few other inputs came through POs, they were able to increase membership size and this shows that POs can attract more people when it meets their demands. However, agricultural inputs distribution hardly attracted married women as it was already accessed by the family through the male head of the household. Since the demands of men and women widely differ, the services of POs also need to diversify in the way it can accommodate expectations of both.

Membership and leadership in POs

The proportion of women and men in membership and decision making positions are few of the parameters to be considered in gender equality. An assessment was made on fortytwo POs and revealed that women membership comprises of 17.7% in a total members of 20,275 smallholder farmers while male account for the remaining 82.3%.
Surprisingly, 95.2% of the POs have women below one-thirds of the total membership and none of them have more than 45% (Chart 1). This remains a concern when compared to the proportion of the total female population of Ethiopia which shows 49.5%.

59.5% of the assessed POs have below 20% women as membership and this is even worse when it comes to the leadership positions. As it is evidently shown, 66.7% of the POs have not any women in the Executive Committee (see chart 2). 30.9% of the POs have one woman in the Executive Committee of seven members. However, none of them are in the major decision making positions such as chairpersonship, deputy chairpersonship or secretarial posts. A question comes here what implication does this have in terms of gender?

The underlying factors for the situation are diverse. The major ones include patriarchal view of the society, community expectation of women’s roles in domestic activities, low access of women to capacity development opportunities including education and information and expected benefits of being member in a PO. Furthermore, other tasks that occupy significant proportion of their time affect the decision of men and women to be members. Equally and even more important is whether services of POs are aligned with men’s and women’s interests both in terms of meeting demands, timing and whether the community has the required awareness on the existing services.

For STARS, beyond participation of men and women, a gender issue is about the balance of power to make decisions and sharing the benefits and risks in the areas of their operations. A critical question comes as women are so low not only in membership but also in leadership roles.

In order to tackle gender issues in value chain, STARS program’s strategy looks at both supply and demand sides in terms of gender sensitivity. On the demand side, STARS assesses the exact services demanded by both men and women and relates it to the existing services in the market on a business model. It also shows the available demand to service providers so that they are able to respond to those demands.

From the supply side, an inward looking by POs enables them identify critical factors that prevent women from participating and taking roles in the leadership positions. It enables them to check whether the services that POs are providing are equally responding to the demands and interests of men and women. Proper promotion of the existing services to men and women is also a critical factor where STARS is working to make a difference.

Once non-financial services that respond to the demands of men and women are in place, a trigger which the market would take up will be created. To make this a reality, STARS makes a mapping of the existing services, assesses their relevance to the interests of men and women and works with the service providers to adjust existing services or/and enables them to introduce new services.