Two weeks ago, I visited ICCOâs High Premium Rice project in Indonesia, a Public Private Partnership (PPP) which I also visited two years ago. I could now see with my own eyes what happened over those two years. 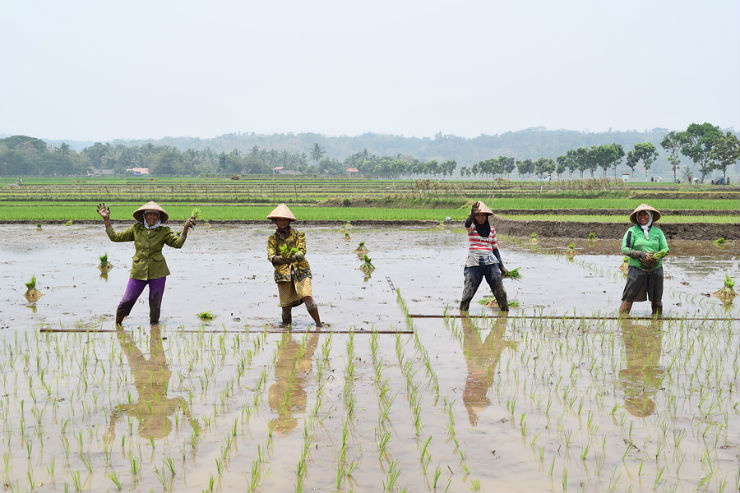 What striked me the most was the importance of the ‘Gapoktans’, which are rice farmer cooperatives who negotiate with the off takers of rice. Within the rice market, rice farmers have obtained a better position thanks to their increased professionalism.

In the 1970s, Indonesia experienced what was called the Green Revolution. The Green Revolution brought about agricultural development through the building of irrigation canals, but also through the introduction of chemical fertilizers and pesticides. In this way, farmers could grow new rice varieties which could be harvested faster. In other words, it led to a higher yield which increased the national rice production, contributing to Indonesia’s self-sufficiency of rice.

However, the Green Revolution had a down-side as well. Severe outbreaks of rice diseases occurred and although the quantity of the rice produced increased, the quality decreased. With the signing of the ASEAN Free Trade Area in 1992, better quality rice from countries such as Vietnam and Thailand was imported to Indonesia, which formed a threat to Indonesian rice farmers.

In this context, the PPP on High Premium Rice was set up. There is a need for farmers to improve their agricultural practices in order to at least meet the quality of imported premium rice. That means – among others – reducing chemical fertilizers and if fertilizers are needed, using organic fertilizers. This not only increases the quality of rice, but it also the reduces the costs for inputs. Furthermore, in order for rice to be high premium rice, it has to meet several requirements. This has mainly to do with the processing. For example, it is not allowed for the rice to have black spots. Using good techniques for  drying, milling, sorting and packaging is thus very important. The PPP on High Premium Rice gives this kind of support.

Another important aspect of High Premium Rice is to strengthen the Gapoktans. Increasing  the quality of rice is one thing, but a farmer also needs to know how to negotiate with off takers to make sure that he demands a fair price, otherwise the off takers will take the higher margin. That’s where I get back to the business meeting I attended. In these business meetings, members (farmers) of the Gapoktan negotiate with the off takers of rice. Every off taker is searching for a specific kind of rice, for example, rice which keeps well in a dry environment. If a certain farmer meets the demand of a off taker, they start negotiating for the best price.

High Premium Rice trains the farmers in negotiation skills, but also in management  and finance. This all contributes to the professionalism of the farmers, which puts them in a better position towards the off takers. I was really impressed by the farmers!

Duplicating the project in other regions

During my visit, I also talked to the advisor of the governor of Central Java. He asked me if this project could be rolled out in other regions as well, as now it is only a relatively small project targeting 10,000 farmers. The project will last until the end of 2019 and the funder – the Facility for Sustainable Entrepreneurship and Food Security of the Dutch Ministry of Foreign Affairs – will not continue anymore. However, we will look for opportunities to duplicate this project in other regions as well.

The ultimate goal of course is that it becomes self-steering. The supply and demand should be something realized by itself without the market being disturbed. This Public Private Partnership can then be seen as  a little stimulus to make that happen.