Mitigating effects of climate change through crop insurance in Rwanda

Farmers in Rwanda increasingly face excessive rainfall and floods or extreme drought due to climate change. This causes farmers to lose what they have invested and limit their chances to access a new loan for next season. ICCO Cooperation’s STARS program, in partnership with the Ministry of Agriculture and Animal Resources (MINAGRI) in Rwanda, assists farmers to access crop insurance. This helps them to get truly and fairly compensated in case of poor harvest or crop failure. 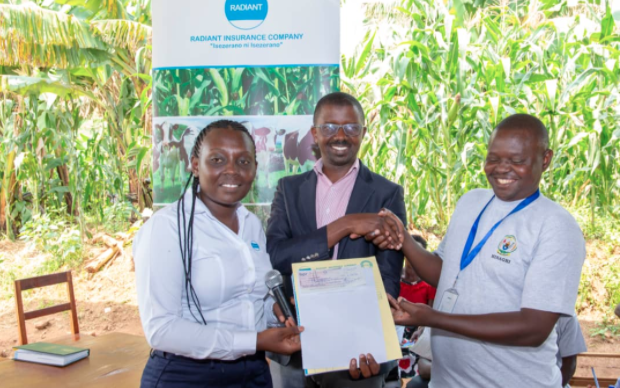 Crop insurance is a crucial ingredient that can guarantee access to finance for smallholders as it can help to de-risk agriculture financing. Currently, farmers fail to repay their loans due to crop failure and poor harvest, adding more difficulties to a sector already prone to high financing risks. In 2019 and 2020, ICCO Cooperation’s STARS program in Rwanda noticed that many rice and maize farmers within its program defaulted on their loans as a result of rainfall shortages (for maize) or excessive rainfall (for rice). To mitigate the risks financial institutions encountered as an effect, STARS had to require farmers to include high value collateral in their loan applications. For farmers who did not have enough collateral, crop insurance was bundled into their loan application. To further promote crop insurance, the STARS program decided to partner with the Ministry of agriculture (MINAGRI) to mobilize and sensitize farmers to access crop insurance.

MINAGRI and the STARS team, together with Rwanda’s rice farmers federation, organized field workshops involving farmers organizations and platforms, explaining farmers the benefits of using the yield-indexed insurance and area-indexed insurance; bundled into their loan products, for which farmers pay a seven per cent premium (covered by a 40 per cent subsidy from the government) to the insurance company on their initial investment.

“We experienced farmer resistance due to previous bad crop insurance experiences, where farmers felt cheated, because the compensation process was not transparent. Farmers had a feeling that crop insurance especially benefits insurance companies. Through STARS’ close working relations with the rice federation it created more confidence for farmers, as they see the federation as an organization that always defends their interests. What also helped was that MINAGRI offered 40 per cent subsidies in the scheme; as well as involvement in initiation, planning and monitoring during the implementation of crop insurance scheme. This all helped farmers to gain trust in the scheme.” explains Museruka Joseph, Program Manager National Agriculture Insurance Scheme.

As a result of the interventions, 83,654 rice and maize farmers have now ensured their crops and 14,472 ha of rice and maize are under crop insurance. So far 115 million euros has been paid as compensation to farmers by the insurance companies (Sonarwa, Radiant and Soras). In addition, 30 independent local crop loss assessors have been trained to carry out damage assessments.

“Early 2020, on our 120 ha rice plot, 41 ha was washed away by flood, so only 79 ha remained. Collectively, we had paid 1,800 euro as a premium to Sonarwa crop insurance company. We got compensated 12,000 euro for the 41 ha which we lost. This is good news to all cooperative members; without crop insurancewe could have faced big challenges,“ said Mutangana Jean Paul, president of farmer cooperative COPRIMU in Nyagatare district.

More info
Read more about How to Scale Fee-Based Services within Producer Organizations in Rwanda
Published on November 20, 2019 by Christien van den Brink