In the first two years of its implementation, ICCO Cooperation’s STARS program in Ethiopia has learned that improving access to finance does not automatically result in increased productivity and profitability of smallholder farmers in the absence of a strong input supply system and vice-versa. To solve that problem, the STARS team in Ethiopia has shifted its focus towards developing more productive partnerships between microfinance institutions (MFIs)  and producer organizations (POs). 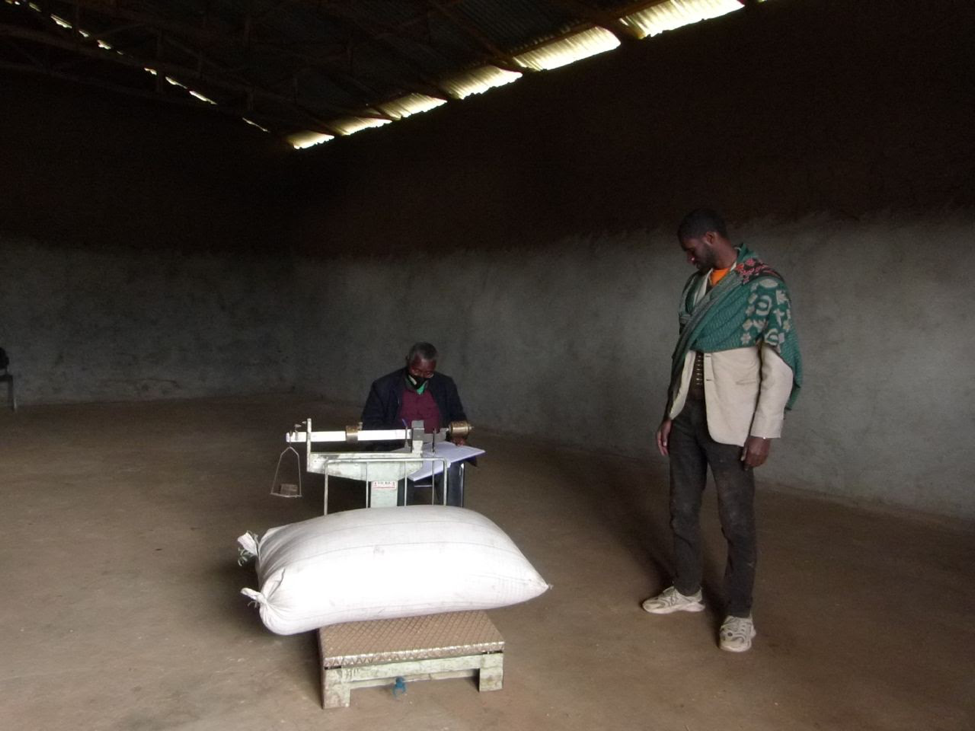 Access to warehouses
Access to a warehouse is crucial for a strong input-supply system, allowing POs to distribute inputs (such as fertilizer) to farmers and to aggregate produce from their members to sell it in bulk to prospective buyers. However, some partner POs in the STARS program lacked access to adequate warehouse facilities. As a result, they were unable to capitalize on favourable market conditions for input distribution and for selling produce in bulk.

Shifting role for MFIs in Ethiopia
MFIs used to provide in-kind loans (in the form of inputs) to farmers who then repaid MFIs in cash. This was done because inputs are not always (or rarely) available rurally and cash loans would thus lead to farmers taking loans for inputs they cannot access. As a result, the cash may be diverted for non-productive purposes by farmers. The distribution of agricultural inputs directly by MFIs, although common practice previously, is not allowed under existing National Bank of Ethiopia (NBE) regulations since MFIs are only mandated to provide financial services to their identified clients. Furthermore, the activity involves additional costs and potential risks for MFIs. Nonetheless, in the absence of reliable input suppliers, MFIs felt they were providing a much needed service. The POs on the other hand, were not keen on MFIs distributing inputs as they considered that to be their own role and thus did not appreciate the competition. Up until last year, despite the regulation, the local  government tolerated MFIs distributing agricultural inputs. Since then, the government has started enforcing regulations, essentially making it impossible for MFIs to provide inputs directly through in-kind loans.

Warehouse rehabilitation
After one year of implementation, ICCO STARS understood that the absence of better quality storage facilities stood in the way of improving the POs’ performance on input supply for members and selling members’ produce to buyers. The above, combined with the sustained demand of the government to provide support on this issue, led STARS to support POs by covering 50 percent of the warehouse rehabilitation costs and by providing technical advice on how to make best use of the warehouse.

At the same time, STARS worked on strengthening the institutional capacity of six MFIs, of which one was Bussa Gonofa Microfinance. STARS facilitated a partnership between PO Limma Walta’i and Buussa Gonofa.  In addition, Limmu Walta´i was among the POs selected for warehouse rehabilitation support through the STARS program, enabling the PO to provide better services to its members and non-members. As a result of the rehabilitation of the warehouse, access to and the supply of inputs for farmers improved and the volume of malt barley traded by the PO significantly increased. Moreover, it enhanced the PO’s visibility and standing in the community while convincing outsiders, such as Buussa Gonofa, of the value of a strong PO.

Limma Walta’i PO member Mr. Kedir stated that “access to better quality storage was one of the problems of our organization. In the absence of a storage facility, we cannot serve members with inputs and markets. Storage is an indispensable asset for any PO. The technical and financial support we obtained from ICCO STARS enabled us to upgrade our warehouse´s space and quality. Now we are able to receive more input and output supplies. We are using the warehouse for storing different products such as seed, agro-chemicals, and fertilizers. Because of the warehouse, we are able to keep our grain in stock for sometimes to get a better price. Moreover, our organization’s visibility and performance have shown significant improvement.  More members have subscribed; other companies have shown interest to work with us.”

New partnerships
STARS organized a stakeholder meeting in 2019, which was crucial to forge a bilateral agreement between the MFI and PO, based on renewed trust and understanding. Buussa Gonofa and Limmu Walta´i PO, explained to each other their respective services and operations. According to Mr Debela Mosissa (a Value Chain Development officer in STARS) the parties used to see each other as rivals. The MFI was perceived by the PO and the community as a money lender with no real value for smallholder farmers. The MFI also used to perceive the POs as weak, corrupt and not worthy of partnering with.

“Our relation with POs was so rough, not only on the supply of inputs, but also because they have been financing individual farmers and traders who have an agreement to sell their malt barley supplies to Heineken. The POs were not happy with this  because it means more competition for them. After the workshop, we started to discuss with them on how to collaborate with POs to distribute seed and agricultural inputs in the districts where our MFI is functioning. In 2020, we distributed 600 quintal of improved malt barley seed through limmu waltai PC on commission basis, 20 birr per quintal. This collaboration not only benefits the PO, it also benefits the MFI to maintain its client and reduce the risk of default,” says Gelgelu Tusa, BG Rural Service Facility regional coordinator (which is a sub-branch of the MFI).

As part of the bilateral agreement, it was agreed that the PO would distribute malt barley seeds to MFIs’ clients; benefitting 600 farmers. Thanks to the warehouse, POs were able to improve access to inputs, which allowed the MFI to continue to provide loan services to smallholder farmers and the PO to generate additional income. Not only is the PO now dedicated to continuing doing business with the MFI, they are also exploring new business relationships with other enterprises/companies to diversify their source of income.

“I am a client of the MFI and a member of Limmu Walta´i PO as well. I worried a lot when I heard the information that the MFI was banned from distributing in-kind loans to its clients by the local government. An in-kind loan is more important than a cash loan for us [because of the limited access to inputs]. [Now] I use full input packages and get those inputs at the right time. As a result, my yield has significantly increased.  I am also comfortable with the repayment schedule; it is affected after the crop is harvested and marketed, ” explains farmer Memhere Desalegn Nigusu.

Mutual understanding is key
POs and MFIs may not see each other as natural allies but as competitors. The partnership between Limmu waltai and Bussa Gonnofa, shows that mutual understanding of goals and activities paves the way for sustainable cooperation benefiting MFIs, POs and their members.

About STARS
The Strengthening African Rural Smallholders (STARS) program is a five-year program (2017-2021) implemented by ICCO Cooperation in partnership with Mastercard Foundation. Adopting the market systems development approach, STARS improves access to finance and markets for over 200,000 smallholder farmers with emphasis on women and youth in Burkina Faso, Ethiopia, Rwanda and Senegal.

More info
Read more about Business Linkages Strengthen the Value Chains in Rwanda
Published on May 4, 2020 by Hikma Sultan