It sounds so easy: improve the quality of the rice that small scale farmers produce, so they can sell it for a higher price and their income increases. ICCO Cooperation is working in a public-private partnership to train farmers in Good Agricultural Practices, so that yields and quality increase with less use of inputs like fertilizer. 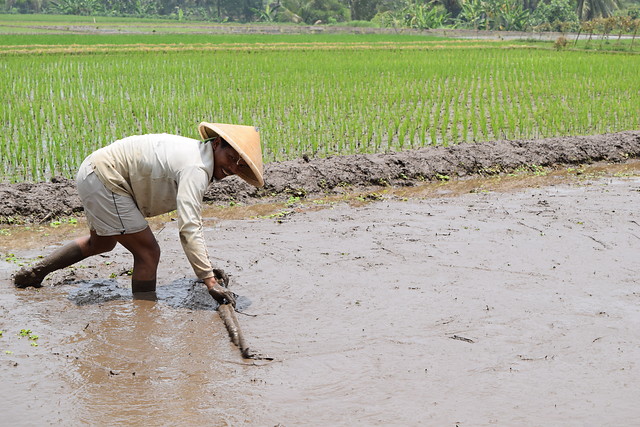 I visited ICCO’s high premium rice project in Java, Indonesia, and spoke with the farmer groups that participate in this project and our project manager in the field, Ruth Subodro, to find out what it takes to realize this ambition in practice.

In Central Java, Indonesia’s main rice producing area, rice paddies are everywhere. I know that rice production has been decreasing over the last years, but I can hardly believe it when I look around – every spot seems suitable for growing rice. Java is densely populated, but as we move out of Surakarta city into the rural areas, there are less houses and more of the intense green of the rice paddies.

On average, the plots of the farmers in Central Java are less than 0.5 ha. To have an impact, the project has to reach a large number of farmers. ICCO and its partners train about 400 ‘model’ farmers. Each farmer should convince another 25 farmers with the increased yields of their rice paddies to follow suit, reaching a total of 10,000 farmers. Mbah Parno, owner of one of the paddies, glows with pride when he shares how much his rice production increased, and is convinced the whole group will have adopted the new production methods within 3 to 5 years. Although I think that reaching this scale will be challenging, my gut feeling agrees with this farmer. The differences between the paddies are obvious, even to me. His rice is planted in neatly organized rows of three, leaving a row open. Everywhere else, the rice is planted in rows at best, but so densely that pests and diseases can thrive.

Reaching the poor with modernization

A challenge for the consortium partners, is to deepen their impact by also reaching the poorest, the landless, mostly female, farmers. The female farmers usually do the weeding and harvesting. I get to see the action of the harvest time, and the women that cut the rice want to demonstrate some of the tools they are working with. Previously, the women had to thresh the rice by hand, but they now have a small threshing machine that makes their work a lot lighter. Working on the land is known to be hard and pay is low, and because of those reasons, less and less popular. The introduction of this type of machinery kills two birds with one stone: it increases the income of the landless farmers, and it will make the work more attractive again.

Chances and challenges of farmers’ organizations

Ruth Subodro indicates that the organization of the farmers is key for the project to succeed, and also one of her biggest concerns. Organization is necessary not only to deliver the trainings and to collectively purchase inputs against lower prices, but also to collectively market the rice. One of the farmer associations I visit in Boyolali is a case in point. The association has been able to set up a small processing facility where the rice is peeled and sorted, adding value to the produce. Pak Ragil, the chief of the association, has been very successful in selling the rice of his members to a trading company in Jakarta, where people are willing to pay a higher price for better rice. His main challenge is to be able to deliver the quantities the trader wants. Now, Pak Ragil needs another processing facility to meet the demand of the trader and he needs to convince the farmers to invest in it.

In practice, it is already difficult to convince farmers to sell their rice to the association. In part, Ruth explains, the associations have to work on building trust between the members. They need to increase transparency and accountability. Some farmers sell to intermediaires rather than to the association out of necessity, as they do have the means to harvest the rice themselves. The intermediary pays a fixed price for the rice and arranges the harvesting. Therefore, the consortium also works on developing financial products that make it possible for the farmers to access credit, making it possible for them to invest in their business and benefit from higher returns.

What I learned from the trip is that effectively working with the many small scale farmers is key to reaching impact and scale. The project runs until 2019. I look forward to going back and seeing the results of the farmers’ efforts.