Who would have thought ten years ago a development organisation like ICCO would cooperate with satellite experts from the Netherlands Space Office? 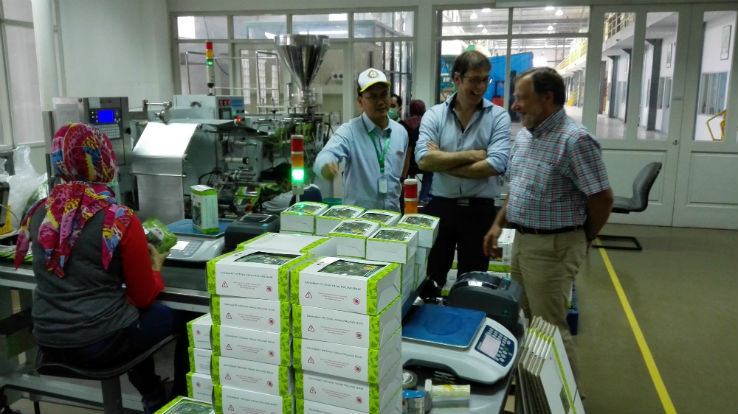 Finding a common language in these kinds of public private partnerships, can be challenging. And when we understand each other, how do we make ourselves understood by our beneficients, the smallholder farmer? This, I wondered during my visit to Indonesia to get an update on the SMARTseed program, one of the projects of Geodata for Agriculture and Water (G4AW).

Using satellite data from Geodata for Agriculture and Water

Development organisation ICCO is the lead agency in the Indonesian PPP SMARTseeds, with East West Seeds Indonesia (EWINDO) and other partners, funded by the Netherlands Space Office. The aim of this programme is to use satellite data from Geodata for Agriculture and Water (G4AW) for the benefit of smallholder farmers producing tomato, cucumber and chili peppers in Eastern Java and South Sumatra.

The factory of East West Seeds and their testing station are a located a two hour’s drive east from Jakarta in Purwakarta, Java. Together with Joost van Uum from Netherlands Space Office, Afrizal Gindow and Ignatius Pratama from East West Seeds, Kees de Ruiter and Rahmat Herutomo from the ICCO-Indonesia office I visit the location to find out for myself how the program is working out. It is impressive to meet the team, working here. They are very committed and proud to be part of the SMART seeds consortium.

The ambitions of the PPP are high: engaging 100,000 farmers with the use of these new technologies. Although the programme has only just started, the results are already showing. After an extensive baseline survey and collecting soil samples, the pilot phase has started. EWINDO has developed an app for the mobile telephone called ‘Sipindo’ that distributes important information not only to the farmer, but also to traders.

Through GPS on the smartphone farmers can indicate where they reside and receive tailor-made information on the weather predictions for their area, on soil conditions, on plant diseases and receive advice when to sow and when to fertilize. Also it advises on irrigation and fertilizer requirements which can lead to substantial savings because both are often over-utilized.For those farmers not on the internet the service uses text messages. Furthermore it connects farmers directly to traders, and gives them market price information. I was deeply impressed by this use of modern technology.

Looking at the next farming generation

In a matter of weeks over 2,300 farmers have downloaded the app. However some farmers have already deleted it. The crucial question is: why? That’s ICCO’s main focus at the moment: We need to find out quickly by talking to them directly on how they are using the app. It might well be about user-friendliness and finding a common language between the technical experts and the end-user, the smallholder farmer. Does the farmer fully understand how the app works and the information provided? This will have substantial consequences for the impact that is achieved. Fortunately, it’s still early days so we have plenty of time to work on further improvements and expand its use.

A hopeful and inspiring development is the fact that the use of these modern technologies is especially appealing to young farmers. That is good news as we are looking at the next farming generation.

Photo: The factory of East West Seeds and their testing station are a located a two hour’s drive east from Jakarta in Purwakarta, Java. © ICCO