Tenderstem. I had never heard of it, but since I spent the last few days in Kenya, this vegetable will have my special attention further on. 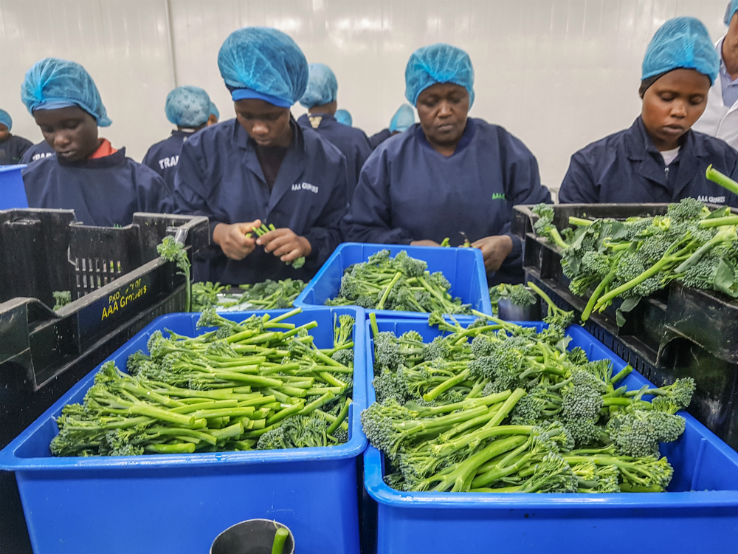 Together with four Albert Heijn employees with an assignment to produce ‘vlogs’, I visited AAA Growers in Nairobi. AAA Growers is a farm with five locations in Kenya that cultivates 6000 tons of vegetables – such as red peppers (‘chillies’), haricot verts, peas – and fruit a year, and a few tons of flowers (mainly roses). The company exports part of his huge harvest to one of the biggest retailers in The Netherlands: Albert Heijn. Tenderstem (‘bimi’ in Dutch), the broccoli-like vegetable with a long stem and a smaller ‘flower’ is one of those export goods.

Albert Heijn does not just import goods from every African supplier. To hold on to high standards and trade fairly at the same time, the AH Foundation was established ten years ago. This foundation imports products from Africa and co-invests, with their African suppliers, in local projects that improve the conditions of the community. The focus of the projects is housing, health care, education and economic development. Fair Match Support and ICCO assist the AH Foundation ever since. ICCO is responsible for advice, program management and monitoring.

During the guided tour on the farm in Thika, near Nairobi, we followed the production process of the tenderstem. We saw how it was picked of the land, we saw the crop get cut, washed, packaged and loaded into the truck. A streamlined process that was videotaped by the four AH vloggers in a flashy way to show colleagues and customers the origin of the vegetables in the store. Their videos are posted on Appietoday starting July 12th.

To export goods to Albert Heijn, a local supplier has to meet a number of strict conditions. For example, ensure good working conditions and a decent salary for his employees. And he has to ensure that the products are converted and processed in a safe, hygienic and sustainable manner. So the supermarket can guarantee its customers that the products meet our high quality standards and are produced in a honest and sustainable way.

Frank Obure, the technical manager of AAA Growers, told us that the company offers jobs for 4000 employees. At the farm in Thika hundreds of people were occupied in vegetable processing when we visited. On the land, but mainly in the processing of goods in the cooled spaces inside. Because we, Europians, like to buy ready to eat vegetables in foil, there’s a great amount of work to carry out in this company in Kenya.

Sustainable production, social investing and responsible consumption, that’s what I saw. Imagine that the next time you buy a package of tenderstem or peas. I have witnessed the cutting, washing and packaging of the greens within a few hours to make sure we can have them in the shop a day later.

During the visit, we also spoke to Paris, one of the women who pickes beans on the land. She worked here since she dropped out of school and has been employed here for five years now. She is proud to be able to maintain her family like this. For her and her colleagues, living conditions are also improving. Because the programs of the AH Foundation pay particular attention to the circumstances of the employees and the communities they come from, usually around the supplier’s location. They even improve the living conditions of smaller famers involved in the production of the supplier.

There is still much to do, but due to the financial support of AH Foundation and AAA Growers, both of which invest a part of their profit, the nearby clinic will be expanded with an additional building. That is necessary. While we visited, we came across a long line of patients waiting in the blazing sun. This new building certainly does not solve all the problems. More medication, especially for HIV treatment, and more staff are a necessary next investment.

Chicken at the police station

The police station that was also built with investment by the fund, looks different than we would expect. Two women with small children live in the building and chickens are roaring around. The women provided us with a solid explanation for this: the policemen are on surveillance all the time, so their spouses can use the new built office space as a home. Simply as that. It’s a perfect example of how we could do it all wrong if we would just try to help from our perspective. Our convictions will not always match what the local people actually wish for. That is the essence of our work for me: supporting people’s own talents and investing in the strengths and habits of the community. I am proud of the work that has been done in this community and how ICCO contributed to it.

What do these developments mean?

Kenya suffers with a huge unemployment rate, visible even on the streets. It is estimated that throughout Africa 20 million jobs will be needed to employ young people the next few years. Young people who do not find work after school, choose short term alternatives like selling goods on the streets. Becoming a farmer is not a popular choice. The more the youth sees that farming connects them with Western countries and ensures a good living, the more likely they will be interested in such a way of life. Only then the real potential in this country can be addressed.

To conclude, I advise Albert Heijn and AH Foundation to be proud and to show it. Let the customers and other stakeholders experience the impact that this cooperation has on African farmers. Regarding future investments: involve small farmers in the process. Allow them to deliver a number of products to the larger suppliers, so that a larger community will benefit.

Would you like to learn more about the collaboration between ICCO and the AH Foundation? Read on here.