Blog by Saugat Gautam, Information & Knowledge Management Officer from our Nepal Office, sharing his experience during a recent relief operation to the flood affected communities of Nepal. 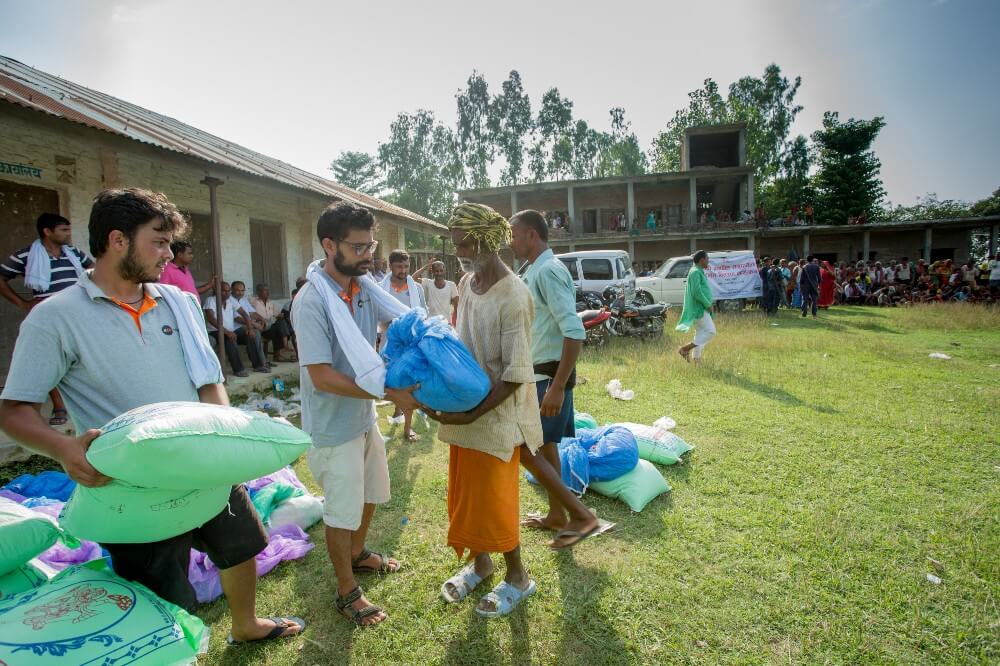 The last two weeks in August had seen the worst of flood disasters in Nepal. I had been constantly following up the news of havoc in the Southern belt of the country and the heartbreaking posts and pictures in social media had gotten me miserable. Having gone through the aftermath of earthquake only two years ago, my heart grieved as I saw faces of rage and expectations, waiting for relief to cope with nature’s cruel destruction. Having felt so strongly to do something for communities in need, I was more than happy when my organization- ICCO Cooperation assigned me to go for a relief mission to one of the worst flood hit district Rautahat. I knew it was going to be one of the most challenging and critical humanitarian mission of my life, but I also knew that being a part of this service to the community would give me a valuable life lesson.

In the morning of 20th August, amidst the continuous down-pour, the ICCO team left for Hetauda, a market hub about 87 kms from Kathmandu, from where we would be joined by our local partner, CCDN.

Getting to Hetauda was already challenging as the rain, landslides and damaged roads did not spare us and the 3 hours ride turned into 7. As I quietly looked into the excavators making our way out of the blocked highway, I could not stop thinking about how communities were making it from one day to the next as the weather seemed to get worse by the hours. The supplier we met at Hetauda was already full into action, packing the best quality food items that we had ordered for, there was no compromise. The timely fund support from Kerk in Actie (KiA) made it possible for us to procure all needed quality relief food and non-food items in Hetauda, from where we began our arduous journey to the flood hit areas of Rautahat. As we heard stories of looting of relief items and it was quiet late in the night as we arrived in Rautahat, we decided to keep our truck under the surveillance of policemen at Chandranigahapur. The following morning, after a brief meeting with policemen, we moved towards Gaur, the HQ and municipality of Gaur where we had to meet and discuss with local authorities on where and how to start the relief distribution.

Although the flood was receding, the roads in Gaur were still filled with substantial amount of water. The houses were in dire condition, most of them completely damaged. The local police station where we had to ask for support was busy pumping out water of the building. There were piles of life jacket lined up on the floor and the rooms inside smelt mushy. As a wooden boat passed by us, I imagined people being rescued out of waters, children, sickly and elderly struggling to make it to the safe place and the whole place that once used to be home for the locals turning into a life and death crisis. The disaster in Gaur spoke volumes of the nature’s atrocity. The Local Development officer instructed us to distribute goods at Mudwalwa village, prior to which we had to have consensus with all political parties. We were also notified about the looting of relief items in last days and were asked to proceed with extreme caution and be prepared to halt the distribution just in case fights broke out. As if it was not enough, a local journalist warned us about how politically unstable the area was and how policemen had to blank-fire to control the crowd conflict in last few days. I later realized that he was building up all this evidence to probe us to take the relief distribution to a different village where he hailed from.

“Relief politics- I told myself”

Finally we arrived in Mudwalwa. The village looked strangely peaceful. As we unloaded the relief items, we were immediately proven wrong. Out of no-where hundreds of people surrounded us, bombarding us with questions in their local language, some angry and some sad expressions. The ward secretary immediately called upon leaders from different political parties, community leaders, security personnel and our relief team together to discuss the distribution. The attendees agreed to target 300 households from severely affected community. The ward secretary convinced the group that the remaining households would get relief items from the next consignment of District Disaster Relief Committee. People started shouting and we had no idea what was going on. Much to our relief, we were later told about this being a local style of consultation. It almost took us 4 hours to reach into consensus before distribution. A community college was chosen as a distribution point. While security personnel escorted the truck with relief items, ICCO and CCDN team started to prepare for the distribution. Beneficiaries were informed, verification vouchers were made, and community people were deployed to identify and verify the beneficiaries. Together with the local leaders, ward secretary, security personnel and local leaders, relief packages were successfully distributed to 300 families in the community. While most of the recipients were the deserving ones, there were also feudal lords, who called themselves local leaders and claimed to have more losses due to the floods and did not hesitate to take the relief packages. The local leaders and officials congratulated us for successfully conducting distribution program in such a sensitive village. Our pain and tiredness was consoled to some extent with the appreciation we had.

We still had next consignment to distribute. The government representatives recommended name of two villages; Pipara and Saruatha. Since we had a day in between the distribution, we had a good opportunity to assess the local situation at both locations. The severity of damage was almost the same and both communities had significant number of Dalit families who were more vulnerable and marginalized. The situation however had been tensed, since no relief had reached these communities until that day. We also came to know that the ward secretary had been tied to an electric pole for 3 hours in one village as he was condemned of not playing proactive role in bringing relief items and the police had to fire 7 rounds of blanks in the air to disperse the crowd. I already sensed fear and tension in our group. Our photographer had the toughest time as he was dragged from one house to the other; communities requesting him to make pictures of their houses. We could read by their body language; somehow they got a misconception that whoever would get photographed, would get the support first from us. Our effort to try explaining to communities was basically useless; people would surround us and start talking in loud voices. We decided to stop trying and walked back to our hotel.

The next morning, we realized that the LDO had decided that the relief be distributed in Saruatha, as one of high level political leader was visiting Pipara village and we were not allowed to go there due to security reasons. Unfortunately, we also could not get as much security forces as needed since all the security was also diverted for the politician. We did not know how we would do it, but we bravely headed towards Saruatha with 3 policemen, where there were 1000+ people already waiting for the relief distribution. The same administrative procedures and consultation had to take place. From our learning of the first distribution, we kept a fair distance between the voucher collection and relief collection to avoid crowding.

The distribution started very normally and was going fine. After distributing to around 224 households, conflict arose as one of the local guys who was verifying the check-list replaced few names with his own people. People started arguing and fighting with each other rather than trying to resolve. Upon the policemen’s request, we left the scene together with all the papers and decided to wait for the political leaders to sort out the issue. The communication however only worsened as more people started to crowd the distribution point when we only had relief for 75 families. Before we decided it was time to leave, the political leaders came out with the list of 36 needy people from the community and we agreed to distribute the relief items to them. We even suggested that we could also distribute remaining relief package to needy families, but the crowd started being aggressive, different lists of beneficiaries started coming; few warned us not to leave the village without distributing all the packages; and some started to question us.

Some leaders instilled the notion of ethnicity and biasness created by distribution making the situation even worse. We knew it was time to really leave now and had to actually run away from the chaos. We decided to hand over the remaining packages to the Nepal Police with the approval from the District Office; who would later distribute it. The team decided to return back. We were proud of what we could do for the communities, but at the same time was a lifelong experience for us. I understood that emergency and relief is all about knowing the situation and reacting spontaneously. While we must go fully planned, standard checklist might not always work and decisions just have to be taken on the spot.

When language and culture become barriers in emergency response, people’s anxiety turn into aggression because we are not able to understand or react immediately. During crisis, not only victims, but humanitarian workers equally become vulnerable.