We Need to Raise Our Sights to Tackle Climate Change 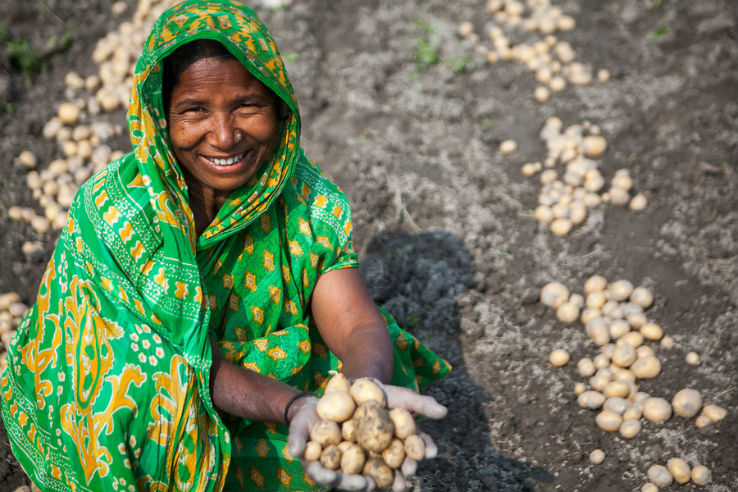 Just accepting the situation will not solve anything. We need to raise our sights. We can turn the tide – if we work together and increase our efforts. Let’s inspire each other with our examples of how to do things differently – like the climate-resilient agri-food systems ICCO is helping to develop.

Between 6 and 17 November politicians from all over the world are gathering in Bonn for the 23rdclimate conference. It’s an enormously important meeting.

In 2015, at the Paris climate conference the 200 participating countries reached an agreement in which they pledged to reduce greenhouse gas emissions and limit global warming to a maximum of two degrees. But the experts know that this is not enough. In Bonn it will become clear whether countries acknowledge the urgency of the situation enough to set their sights higher – in the form of a maximum temperature rise of 1.5 degrees. They will also need to show their willingness to contribute to funds that help the poorest, most vulnerable countries to increase their resilience to climate change.

Not a pretty picture

The consequences of a lifestyle that depends on fossil fuels are enormous: the evidence is clear. Climate change is robbing millions of people of the chance to achieve prosperity. Climate change has a multiplier effect on many existing problems. It multiplies the chance of bad harvests, of livelihoods being destroyed, of hunger increasing, of states becoming fragile, and of displacement and death on a huge scale. Climate change prevents the achievement of basic human rights, such as the right to sufficient food, and so forms a threat to national, regional and international security. If we don’t do something soon to develop inclusive climate resilient agri-food systems and drastically reduce greenhouse gas emissions, by 2030 an extra 100 million people will be suffering from hunger and poverty.

And it’s the people who contribute least to global warming who suffer most from the consequences: the people in the poorest regions of the world. They are exposed daily to the effects of climate change: stronger hurricanes, more drought, more unreliable harvests, bigger food shortages. It’s not a pretty picture.

Bringing an end to hunger and poverty and dealing with climate change are two sides of the same coin. That’s why tackling climate change is an integral part of all sustainable development objectives. And it’s why ICCO is working on climate-resilient agri-food systems. These will not only increase food security and employment, they will also make communities more resilient to the effects of climate change.

The Salt Solution (financed by the Dutch Postcode Lottery) combines climate adaptation with improving food security. Farmers in Bangladesh are having to deal with increasingly saline soils. Floods leave salt behind in the soil, and less rain means that the salt is not easily washed out of the soil either. The ‘salt farm’ on the Frisian island of Texel, which I visited recently, is now using its expertise to offer assistance to 5,000 Bangladeshi farmers so they can grow vegetables on saline soil.

In our G4AW project, satellite data is helping farmers in Indonesia and Vietnam to predict rainfall so that they can irrigate more efficiently and effectively and thus improve yields. This will help improve the living standards of tens of thousands of farmers, as well as reducing water and energy consumption. Our joint ‘Flying Food’ program with TNO promotes grasshoppers as a healthy and tasty source of protein. Grasshopper cultivation requires far less food and water than conventional livestock production and thus offers a solution to the continuing drought in Kenya and Uganda. And our FairClimateFund offers people of limited means access to cleaner cooking in the form of biogas. This saves wood and creates compost, a by-product that is good for the soil.

Climate change highlights our close relationship as humans with the earth and with each other – the world over and across generations. I hope that the government leaders meeting in Bonn will show that they take it seriously. There is no time to lose – we need to get going.