Between November 20th and 23rd, 2018, indigenous leaders from Mesoamerica gathered in Panama to advance on their agenda to consolidate territorial rights. Our partner organization, the Mesoamerican Alliance of People and Forests (AMPB for its acronym in Spanish) organized the VII Mesoamerican Territorial Congress, which included a Women Leaders event, a forum on sustainable development for Indigenous Peoples, indigenous and community economy, among others. 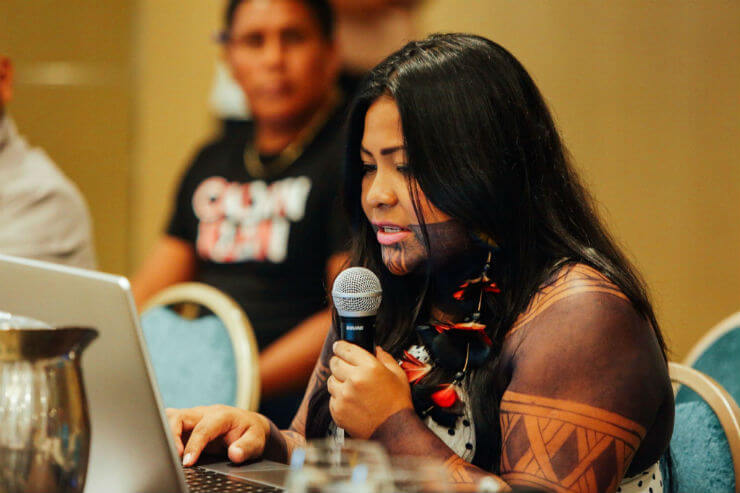 Women territorial leaders from Mexico, Guatemala, Honduras, Nicaragua, Costa Rica, and Panama were invited to discuss priorities to achieve territorial rights with a gender perspective and to make visible the advancements and challenges related to public policies that affect their communities and households. Furthermore they defined mechanisms to upscale female voices in advocacy efforts and in politics with diverse stakeholders from governments and international organizations.

Creation of a Gender Commission

The most important result of the event was the creation of a Gender Commission that will integrate the AMPB; the declaration in Spanish may be accessible through this link.

In this declaration, the women leaders ask their communities and regional political spaces to “recognize and value the important efforts and contributions made by women in the protection and sustainable management of natural resources such as water and forests in the territories”.

They also call on women to gain more access to political spaces: “Although the laws of the countries require the participation of women in decision-making spaces, this is still not fulfilled in practice…. women are no longer waiting for men to call us, we are willing and able to conquer those spaces, because what the laws and statutes say is not enough”.

dditionally, during the day there was presence and support from women territorial leaders from Colombia and Brazil. Herewith South-South collaboration was advanced with political platforms that represent indigenous peoples from South America, including OPIAC, Indigenous Peoples National Organization from the Colombian Amazonia, and COICA, Coordinator of the Indigenous Organizations of the Amazon Basin.

During the event, there was also participation from the local government of Panama City, the Vice-Major Raisa Banfield, the Panamenian National Women’s Institute director Liriola Leoteau, and representatives from multi-lateral and international organizations, such as Inter-American Development Bank, Weaving Ties, etc.

Include women and youth in advocacy

As ICCO and the Civic Engagement Alliance, we expect to continue contributing for women and youth to be included in advocacy efforts to benefit their communities, so that there’s a favorable environment and enough political space for the inclusion of indigenous peoples and to consolidate their territorial rights.