This institutional support of the Lottery is un-earmarked and long-term. Their contribution enables ICCO to invest in innovations and entrepreneurial activities. But the Lottery also supports specific projects. Like Birds, Bees & Business, in which ICCO and Bird Life Netherlands combine the restoration of biodiversity with business activities in the shea value chain. For ICCO, the Lottery is a valuable and trustworthy partner, who allows us to keep searching for innovative ways of working towards a world without poverty and injustice.

A good example of this is The Salt Solution. In 2017, ICCO received an additional cheque of 2.1 million euro from the Lottery for an innovative project to introduce saline agriculture in Bangladesh. Together with Salt Farm Texel, ICCO will train 5,000 farmers in the coastal areas of Bangladesh to start growing salt tolerant crops. These are natural varieties of crops that dó grow on saline soil. The contribution from the Lottery enables these farmers to make their salt-affected land productive again by growing saline tolerant crops. This will improve their food security as well as their income. 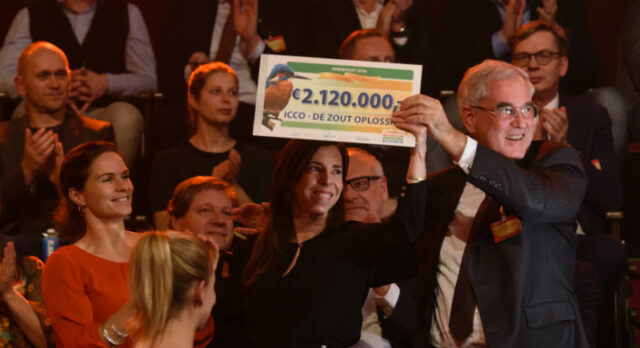 The Lottery also contributed to the start of Manq’a, a movement of cooking schools that train unemployed youth to become chefs. The Manq’a schools specialize in cooking with locally produced organic ingredients, which boosts the market demand for local farm products, as well as promotes healthy and sustainable food consumption. With the Lottery’s contribution of 1.5 million euro’s, the first 10 Manq’a schools were set up in Bolivia in 2014. Now, over 3,000 students have graduated already. Due to this successful example, Manq’a schools are being set up in other countries as well. Like Colombia, where the first students have graduated and found employment in tourism or the hospitality sector.

The Postcode Lottery was founded in 1989 with the ambition to contribute to a fair and green world. This is done by giving publicity to the work of charity organizations and by raising funds for their work. 40% Of the profit of each ticket they sell goes to 103 organizations, who work for people and planet in the Netherlands and abroad. Since its start, the Lottery has become the largest private fundraiser of the Netherlands. Worldwide, the Holding of the Postcode Lotteries is the third largest private donor. In 2017 a record amount of  357 million euros was raised for charity organizations.