Great news for ICCO during the annual ‘Good Money Gala’ of the Dutch Postcode Lottery on Thursday evening. During this festive event in Amsterdam, the Lottery traditionally announces its proceeds from ticket sales of the past year. ICCO, being one of the Lottery’s 112 beneficiaries, received not 1 but two cheques! 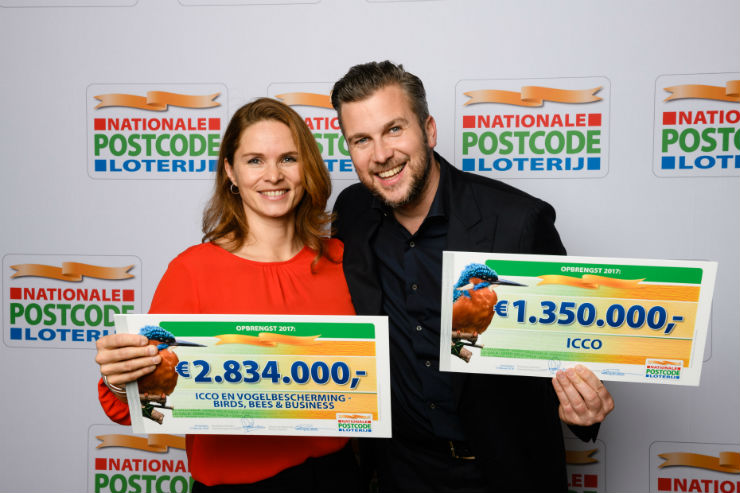 Great news for ICCO during the annual ‘Good Money Gala’ of the Dutch Postcode Lottery on Thursday evening. During this festive event in Amsterdam, the Lottery traditionally announces its proceeds from ticket sales of the past year. For the Lottery, 2017 proved to have been a very successful year, in which a record amount of € 357 million was raised for charity. ICCO, being one of the Lottery’s 112 beneficiaries, received not 1 but two cheques!  Keynote speaker of the event was actor and environmental activist Leonardo DiCaprio, who  addressed the audience and called for a joint approach to the preservation of the earth.

The evening turned out to be very successful for ICCO. In addition to an annual institutional grant of €1,350,000 for our organization, the Lottery announced that our proposal was among the winners of the so-called “Extra Trekking” (=extra draw). Birds, Bees & Business, our joint proposal with BirdLife Netherlands and ICCO’s Fair Climate Fund, received a contribution of €2.8 million! Birds, Bees & Business combines nature restoration with economic development in Burkina Faso. By investing in a sustainable landscape and at the same time producing sustainable products, like shea nuts, local communities can develop a sustainable source of income while restoring biodiversity and recreating a safe, rich habitat for migratory birds who hibernate in West Africa. With the involvement of private sector companies in the shea value chain, Birds, Bees & Business is an example of a public private partnership, aimed at people, planet and profit.

Actor and environmentalist Leonardo DiCaprio spoke on behalf of the foundation he founded in 1998, the Leonardo DiCaprio Foundation (LDF). In his speech he expressed his concern about the irreversible effects that greed and indifference have on our planet. This realization led to the establishment of his foundation, with which he wants to work on a solution to turn the tide and to get as many people as possible in motion. DiCaprio: “If we have more innovators like the Postcode Lottery, who provide a lot of money with which we can make a real, tangible difference, then we have a chance that we can turn the tide and protect this beautiful planet.”

Thanks to the 2.9 million participants of the Lottery, its’ proceeds in 2017 grew to more than 715 million euros in the past year. Half of this is donated to non-profit organizations working on people and planet worldwide. This amount, over €357 million, is divided among 112 organizations. ICCO has been one of these beneficiaries since 2008. In total, the lottery has donated over 5.4 billion euros to charities since 1989, making the holding of the Lottery the 3rd largest private donor worldwide.