A Woman We Are Proud Of: Sara Omi from Panama

As women, we have a fundamental role in forest conservation and in the demand for territorial rights. 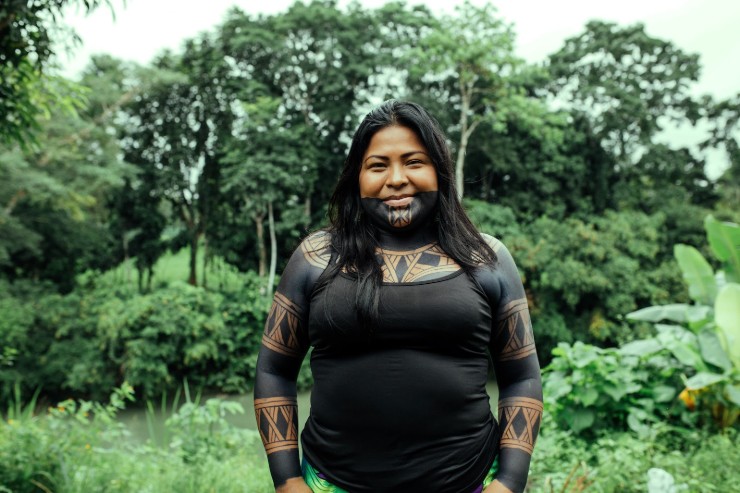 Sara Omi is an Embere leader from the Alto Bayano Congress in the Darien forests of Panama. She represents her region at the EmberÃ¡ General Congress, which is the government authority of the Embere people. The Embere are an indigenous people living in Panama, Colombia and Ecuador, with about approximately 30,000 people living in Panama. Most of their territory is rainforest which the communities have managed for centuries.

Sara is an expert in human rights, especially in right of indigenous peoples, indigenous women, and youth. She has recently been elected to coordinate the Gender Commission of the Mesoamerican Alliance of Peoples and Forests, a platform that unites indigenous peoples and forest communities from Panama, Costa Rica, Guatemala, Mexico, Nicaragua and Honduras. Sara is playing a key role in several initiatives supported by ICCO, in the framework of the Our Land, Our Forests program in Latin America.

ICCO’s partner Mesoamerican Alliance of Peoples and Forests made this beautiful portrait about Sara.

First Woman from Her Community Who Studied at University

With her strong gaze and the perseverance she inherited from her mother, Sara Omi became the first woman from her community to study a university career. At age 15 she left her community to finish high school. She was always curious and her desire to continue studying led her to become one of the best students at her high school. Influenced by her mother, Sara graduated from law school at a private university with the support of a scholarship.

While she was studying at the university, she began to recognize the problems of her territory. She recognized the importance of her career to support her community and thus to denounce the indiscriminate felling of forests and the violation of indigenous women and youth rights. She also learned to give continuity to the process of applying for collective land titles, one of the more latent needs in her surrounding communities.

Sara: “As women, we have a fundamental role in the processes of forest conservation and in the demand for territorial rights. We are the ones who maintain the traditional knowledge, we maintain the identity. We are the transmitters of this knowledge to the new generations”.

Sara believes it is necessary to make visible the efforts of women in their territories. A critic of the traditional system of decision making, she has become the spokesperson for many women in her community and has supported them on issues of reporting violence. One of her main priorities is to demand to the EmberÃ¡ General Congress of Alto Bayano, the need to eradicate violence in their territories.

While being a member of the EmberÃ¡ Youth Organization, she supported the process to pass Law 72 A, which awards indigenous peoples and communities ownership of the collective lands they have traditionally inhabited. She currently works to continue demanding respect for indigenous territories in Panama.

The participation of indigenous women in decision-making processes is a topic to consider in the new spaces where the struggles of indigenous peoples and local communities are being made visible. For Sara it is urgent to create these spaces of participation to put on the table the economic empowerment for women, which will also cover needs of the territory and local families.

Story and photo courtesy of: Mesoamerican Alliance of Peoples and Forests