ICCO Cooperation shares its partner organizationsâ call for Honduran authorities to ensure that their investigation into the killing of indigenous leader and environmental rights activist Berta Cáceres is independent, impartial and transparent. 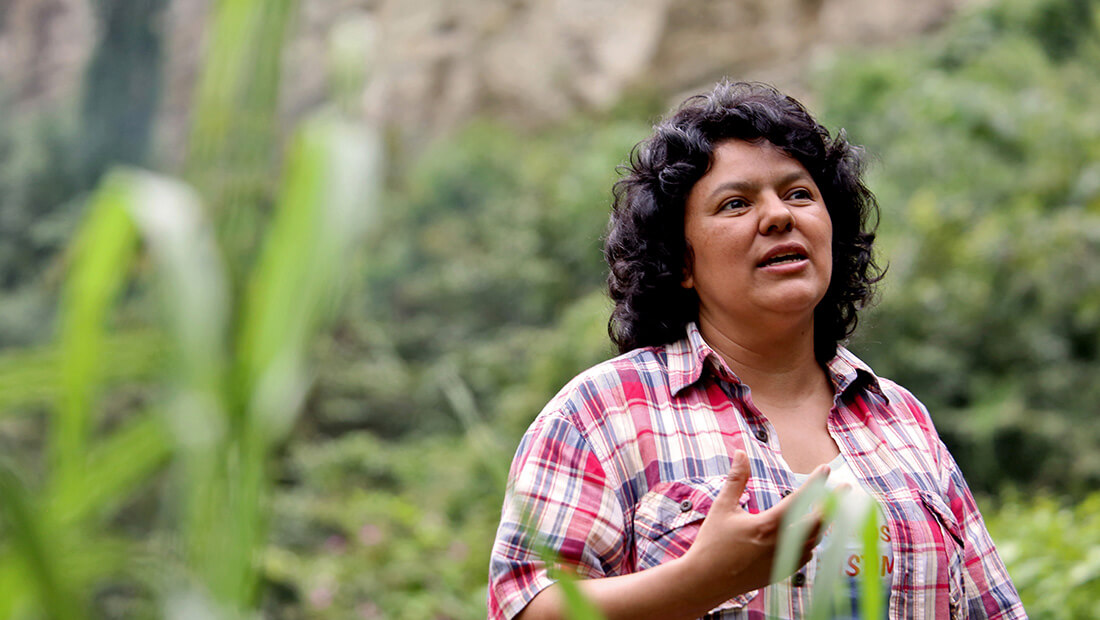 On March 4 environmental and human rights activist Berta CÃ¡ceres was killed in her home in the western town la Esperanza, after she had received death threats for months. CÃ¡ceres’s family and colleagues have said they believe that she was murdered because of her work on behalf of indigenous and environmental rights.

CÃ¡ceres was one of the founders of the National Council of Popular and Indigenous Organizations of Honduras (COPINH). In 2015, she was awarded the Goldman Prize, one of the most prestigious awards for grass-roots environmentalism. Several COPINH members have been attacked and killed for defending their land rights in the face of extractive mega projects. However nobody has been held accountable for the attacks.

CÃ¡ceres herself had received multipledeath threats. In 2009, the Inter-American Commission on Human Rights (IACHR) asked the Honduran government to adopt measures to guarantee her safety, but the threats continued. In the past two years, Honduras has become the country with more environmental defenders’ murders per capita in the whole world.

Firm statements on horrendous crime
In response to these events ICCO Cooperation’s partner organizations in Central America have demanded clarification on CÃ¡ceres’s murder. The Mesoamerican Alliance of Peoples and Forests (AMBP), a platform that brings together 10 indigenous organizations and territorial governments in Mesoamerica expressed: “From Mexico to PanamÃ¡, we join the call for justice raised internationally, through the voices of Indigenous Peoples, local communities, human rights defenders and civil society, for a prompt, efficient, impartial and exhaustive investigation on the incidents related to her murder, and for the intellectual and direct perpetrators to be punished for this crime.”

Colectivo Madre Selva, a Guatemalan environmentalist and Indigenous Rights organization affiliated with the Dutch Human Rights Fund for Central America, administered by ICCO, also made firm statements on this horrendous crime. It describes CÃ¡ceres’s case as representative of the systemic persecution suffered by environmental and human rights defenders in the Mesoamerican Region.

International community shouldn’t turn a blind eye
CÃ¡ceres’s murder has shocked the entire world. The United Nations’ Special Rapporteur on the Rights of Indigenous Peoples, Victoria Tauli-Corpuz, said: “It is highly probable that her assassination is linked with her work in protecting the human rights of the Lenca indigenous peoples to their lands and territories.”

The Central American Act Alliance Forum, formed by several cooperation agencies, including ICCO, also raised its voice demanding justice and calling for international support. “We ask the international community to turn their eyes to the struggle of Honduran Indigenous Peoples, who are suffering from deprivation, criminalization and death. We ask the United Nations’ Human Rights Council and the Inter American Commission of Human Rights, to send a special mission, a Human Rights Rapporteur who contributes to investigate the murder of Berta CÃ¡ceres, based on a process led by independent expert researchers.”

CÃ¡ceres, a member of the Lenca indigenous people, cofounded and led a campaign against the construction of the Agua Zarca Dam on the Gualcarque River, which is sacred to indigenous communities and vital to their survival.The Chinese state-owned company Sinohydro, the world’s largest dam builder, pulled out of the construction in 2013, publicly citing “ongoing community resistance and outrage”. The International Finance Corporation, private arm of the World Bank, also abandoned the initiative.