In January, ICCO was assigned a new project in Colombia called ‘Rural Peace’ by the European Union. Last month, Dutch minister of Foreign Affairs Stef Blok attended the launch of the program. In this series of articles we explain different elements in Rural Peace. We kick off with Manq’a, one of ICCO’s most successful projects which started in Bolivia and will now be implemented in the rural areas of Colombia. 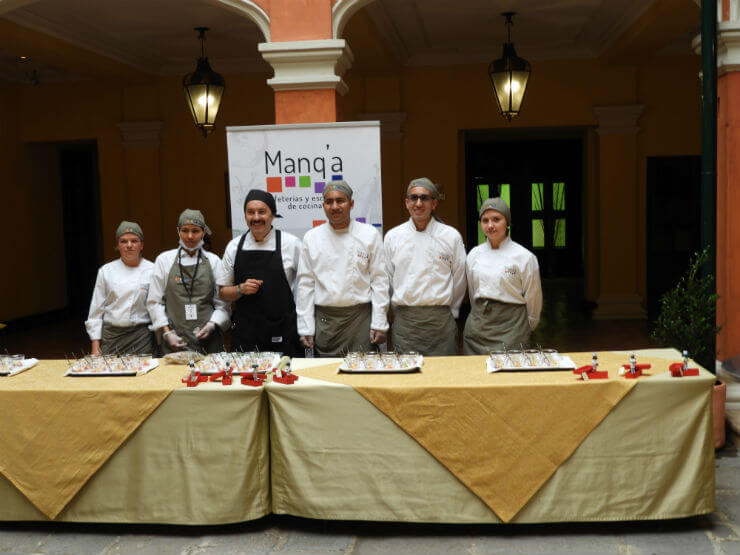 The project was able to grow fast thanks to funding from the Dutch Postcode Lottery: 10 schools have been set up in Bolivia. In 2015 the first Manq’a School opened in the Colombian capital Bogota, and soon Cali followed as well. Nowadays, there are 15 schools in Bolivia and Colombia and 3,115 students have been graduated so far.

In Colombia Manq’a has a special function: it plays a binding role in the peace process. Colombia has many disadvantaged youth as a result of the conflict of the past fifty years. Many became displaced because they were forced to move to a safer area. Others have fought for themselves in the war and are trying to find the right path again.
Now that the Colombian government has signed a peace agreement with the FARC, the time has come to build a harmonious society. Andre: “That is a complex process. Cooking and eating together can play a connecting role in this. It brings people together and promotes dialogue about a new Colombia with its own identity”.

Equally important as supporting the peace process and contributing to a new identity, Manq’a can create new economic opportunities for youth, especially in the rural areas on which the project focuses. Andre: “Rural areas in Colombia are often characterized by poverty and exclusion. For example, generally spoken, youth in rural areas have a 45% lower income than urban youth”.
While initially Manq’a focussed on urban areas, the concept could be very successful in rural areas as well. Andre: “The regions of the project, Narino and Putumayo, both have great opportunities to develop tourism. When tourism increases, the demand for restaurants and other gastronomic facilities also increases. As such, there are opportunities for youth – beyond agriculture or participation in illegal economies – to start an own business in for example gastronomy”.

In order to stimulate food as a part of the new Colombian identity, the partners within Manq’a created a so-called circle of chef-friends, from among the gastronomic elite in Colombia. Andres: “Together with these chefs, such as Eduardo Martinez and Felipe Chaparro, Manq’a advocates for the re-appreciation of the Colombian culinary heritage”. As part of this, ICCO ran the recipe contest ‘AsÃ­ sabe mi tierra’ last year, which transformed Manq’a into a real food movement. Andres: “250 young people participated in the contest and many national media covered it”. ICCO even received a recognition from Colombian government for its contribution to the construction of peace and reconciliation.

Rural Peace is a project funded by the European Union’s Trust Fund for Colombia. Our partners in this project are CETEC, RENACER, Truvalu, PAX, JUSTAPAZ and National Platform for Rural Women.