Agriculture is the main economic activity in Rwanda with 70% of the population engaged in the sector, and around 72% of the working population employed in agriculture. 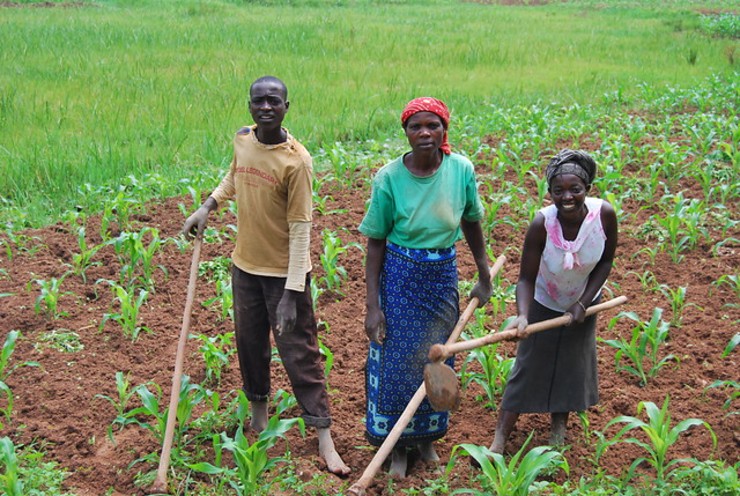 The agricultural sector accounts for 33% of the national GDP. One of the risks farmers have to deal with are fungal diseases. They are always lurking to destroy harvests and making the lives of the farmers miserable.

ICCO’s  STARS program in Rwanda is targeting 44,000 farmers (50% of whom are women) in the rice and maize value chain. So far 37,570 smallholders are reached. We interact daily with farmers to learn and find solutions together to the challenges faced in the maize value chain. And of these, aflatoxin control is the greatest challenge. It impacts on the quality of maize and as a consequence the access to the market and the health of consumers is far reaching.

According to United States’ National Cancer Institute, aflatoxins are a family of toxins produced by certain fungi that are found on agricultural crops such as maize (corn), peanuts, cottonseed, and tree nuts. Aflatoxin-producing fungi can contaminate crops at harvest, and during storage. They are regularly found in improperly stored staple commodities (Smith JL, et al, 2008) and widely recognized as a major health problem, especially in hot, humid countries.

No Quality No Market

As means of gaining a highly rewarding market, a significant number of  farmers store their produce for long (months) after harvest with the aim to sell it at higher price when there is scarcity. This practice however leads to the deterioration of the grains because of a lack of proper handling of maize in the post-harvest period.

Within STARS, we ensure that farmers are structurally linked to markets, where they can get a good price. Efforts were made to approach one of the biggest buyers of maize in Rwanda, called “African Improved Food (AIF)*.“ AIF is the major local nutritious food processing company. It processes 30,000 tonnes of maize annual to manufacture food for young babies and pregnant women.

AIF is very sensitize on the quality of maize where the moisture content should be below 14%. The company has their own laboratories testing the quality of maize. Due to the lack of quality of maize grown in Rwanda, AIF imports about  more than 50% percent of its maize needs per year, mainly from Zambia because the local Rwandan maize has high level of aflatoxins, according to the firm’s Country Director, Prosper Ndayiragije.

ICCO STARS facilitated contractual agreement between two maize unions (UNICOPROMANYA and UCOMAKI) accounting 41 cooperatives with more than 8,000 farmers, to increase farmer access to markets and support them to control aflatoxin. Measures were put in place for controlling the aflatoxin problem, e.g. rapid drying of harvested maize to a low moisture content (less than 14%) reduces the risk of fungus growth and consequent aflatoxin production.

We train farmers on aflatoxin control through using local drying sheds, commonly known as gusharika in local in Kinyarwanda. When the maize is harvest between 18-22% moisture content, this methods helps to bring down moisture content up 14 % with no aflatoxin contamination. In collaboration with AIF field officers farmers are encouraged to use drying sheds to control aflatoxin.

Limited access to capital is the reason farmers cannot afford proper post-harvest handling facilities. The STARS program in partnership with the microfinance institution have developed agri-loan products for a group of farmers and for individual farmers. Because of this, cooperatives have been able to access capital and build infrastructures such as drying sheds that help in improve quality.

By the end of December 2018, 18 cooperatives are in intensive capacity building program, 56 cooperatives with 15,028 members accessed finance with $ 763,342 of loans disbursements which were invested in purchasing inputs, outputs and buying equipments. Chrystome is a president of UNICOPROMANYA Union in Nyagatare district. He has been growing maize since the age of 18, now he his at his 40s: “Drying sheds reached me at 95% of aflatoxin control. Our union has now delivered 300MT to AIF and all the tests show that our maize are aflatoxin free and no rejection.“

The collaboration between ICCO, AIF and UNICOPROMANYA, has reduced the financial risks, according to Mr. Ndateba, the branch manager of  Duterimbere Microfinance- Nyagatare Branch, where UNICOPROMANYA is located. He said loan risks has been reduced to great extent and he has no fear to provide a loan to UNICOPROMANYA. He said their fear has been quality challenge where the buyer reject maize due to aflatoxin contamination. That fear is has now been removed. Ended by saying such collaboration should be emulated to other farmers and buyers.