In Nepal, ICCO was recently awarded “PROJECT REAL – Right to Earn A Living” by the European Commissionâs Instrument for Democracy and Human Rights (EIDHR) of the European Union. 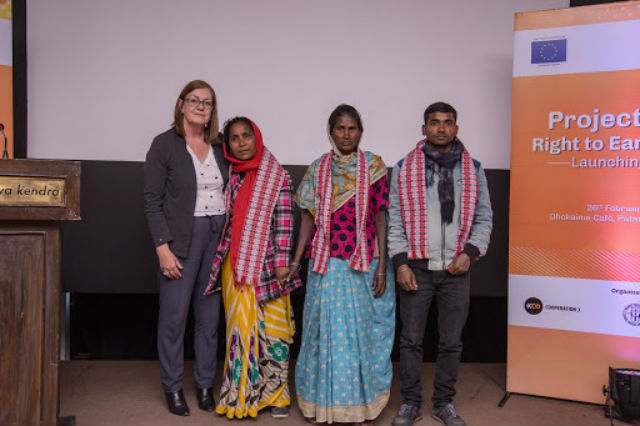 The project works towards promoting economic and social rights of the most marginalized groups in the far and mid-western Nepal.

Project REAL recognizes that inclusion of marginalized groups (including persons with disabilities) and their integration into community as well as promoting them as champions of change in socio-economic development is the only way towards reducing inequality and achieving inclusive economic growth. Therefore, ICCO, along with two local partners (Yes Nepal and Sahakarmi Samaj), will work towards the socio-economic empowerment of most marginalised communities by stimulating community-led development processes. This includes providing the targeted beneficiaries with diversified livelihoods skills, improved access to finance and productive assets (land, forest) for income generation and sustainable livelihoods. Besides, REAL will also work to strengthen local governance to ensure that existing provisions on socio-economic rights are put into practice.

Ethnicity still a major cause of discrimination

Nepal’s deep-rooted caste or ethnicity still remains a major cause of discrimination, posing a challenge for economic empowerment and social change for marginalised groups. These communities, who have been categorised as low in social status according to the rigid caste system, are also at a lower strata in terms of wealth, education, health, nutrition and overall well-being indicators. Communities such as Badis, Kamlari, Kumal, Maganta, Kushbadiya and Chidimar in the mid and far west Nepal are among the most vulnerable groups living in precarious conditions because of their socio economic status. The new project aims to directly engage with these target communities, so that their socio-economic rights are respected, protected and fulfilled, thereby also improving their lives.

Funded by the European Union, REAL was awarded under the ‘EIDHR-Country Based Support Scheme to Nepal for 2016 and 2017’ by the European Instrument for Democracy and Human Rights, to support projects in the area of human rights, fundamental freedoms and democracy in non-EU countries. The total project budget is Euro 408,000 for 42 months. Ambassador Veronica Cody, Head of the EU Delegation to Nepal, officially launched the project and said: “I believe that the actions proposed in the project will address the constraints by enhancing income generation skills, creating an enabling environment for doing business while increasing access to information and finance, promoting and enhancing competitiveness of viable indigenous business, awareness raising about business rights and responsibilities, and strengthening local governance to enable community participation in local mechanisms.”

The project builds on ICCO’s extensive (more than 10+ years) track-record in Nepal of successful economic empowerment models at the grassroots that benefit the target communities. Therefore we also make use of our ACAP (Access, Communication, Attitude and Participation) Framework to ensure inclusive development, as well as digital data gathering via AKVO to conduct real-time monitoring and reporting of activities implemented.