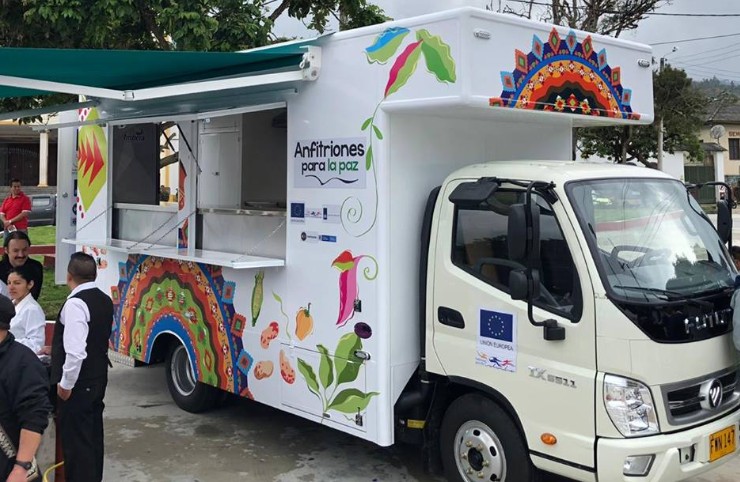 The schools were created with the objective of bringing quality technical training to the remote municipalities of Colombia, thereby strengthening economic opportunities for young peasants, afro-descendants and indigenous people. This can contribute to the construction of peace in their territories. “These kind of schools already exist in Bogota¡ and Cali, where young people, including ex-combatants, have learned to cook. They are people who want to find another life and a better future. Now also people in remote areas can benefit from these schools. That’s why we support them,” said Jeroen Roodenburg, Ambassador of the Kingdom of the Netherlands in Colombia.

In order to reach distant populations, ICCO designed two school trucks. Those mobile schools will remain approximately five and a half months in each territory and will carry equipment and supplies necessary for young people to develop their practical gastronomy classes. The school trucks will also serve as food trucks that will participate in regional fairs and events offering consumers innovative foods prepared by the young chefs.

During the launch, the first agroecological and artisan market took place, in which 40 women producers and artisans participated. These kind of fairs and markets will be developed more during 2019 and 2020 and will involve about 200 women entrepreneurs. Through training and marketing of different agricultural products such as vegetables and fruits, and craft such as necklaces, fabrics and wood carved items, the women will access new markets and improve their income.

The mobile schools are developed within the framework of the Rural Peace project. Rural Peace is a project funded by the European Union’s Trust Fund for Colombia. Our partners in this project are CETEC, RENACER, Truvalu, PAX, JUSTAPAZ and National Platform for Rural Women.