It is women who mostly run the households in rural Africa. Take Chancy Mhango. She earns a living for her family as rice farmer in Malawi. 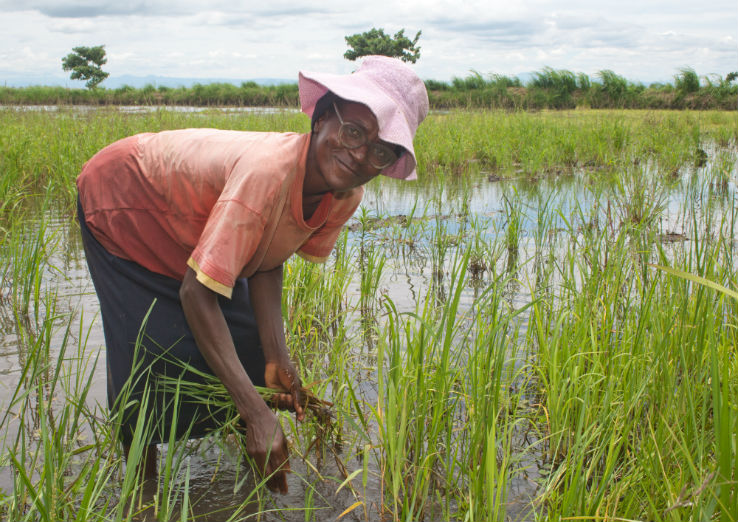 The day of Chancy Mhango, 48 year old, starts at 5 am, cooking and cleaning for her family. At 7, after her 3 children leave for school, she takes the road to the ricefields, where she will work until 5, taking only a short break to eat her packed lunch. After school, her children will join her in the field to help with the work. Later, Chancy goes back home to prepare supper for the family.

This is the typical day of a smallholder women farmer in Malawi. Work in the ricefield demands time and much efforts for a farmer to have a good “harvest”.

ICCO Cooperation is working with 20 farmers cooperatives, in the country. Chancy is a member of Lifuwu cooperative in Salima District, near lake Malawi. She is a widow since 2005, and has to take care of her children and her mother (80+). She explains, “When my husband was still alive, he was working and we had a steady average income, it was easier for the family to make ends meet. After his death, the family income went down and I had to look for other income generating activities.”

Chancy ended up working in agriculture as the district of Salima is one of the main rice production areas in Malawi. The land she is exploiting is the property of the rice cooperative and in a good year she manages 2 harvests. Her income is an average of 1.000.000 Malawian Kwacha a year, some 1,400 US Dollar. Sometimes it is far less, due to bad harvests, caused by weather related issues.

The Lifuwu Cooperative in Salima, has a Rice Research Station with a rice seed production plant machinery provided by ICCO in 2016. Lifuwu is the only cooperative in Malawi with such machinery, it does the cleaning and packaging of the seed rice (in 2 kg bags), with the capacity of a maximum of 30 – 40 tons a year.

The benefit for the farmers is a bigger market for their products. They now not only produce for themselves or for the local market, but they also sell their products to the seed factory that sells nationwide. Since February 2016, Chancy can also sell her rice to the Lifuwu rice seed factory, which gave a boost to her income.

Chancy: “Most of my income goes to my children’s school fees, it is the most important investment I can make for them and also for myself because I know they will take care of me when I am old and can no longer work. I believe that my children and I will have a bright future.”