One of the major challenges facing smallholder farmers in Ethiopia is obtaining new and high-quality potato seed varieties. In response to this issue, ICCO’s (part of Cordaid) STARS program in Ethiopia established a public-private partnership between farmers, a research institute and a laboratory. The agreement was signed in December 2019 with the primary aim of enhancing farmers’ access to higher-quality seeds, which will increase their productivity and improve their livelihood. 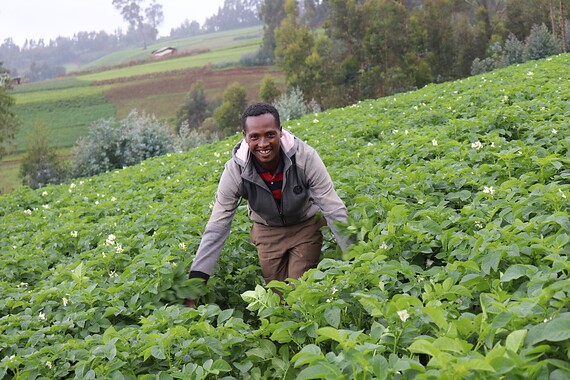 Potato is one of the cheapest roots and tuber crops in Ethiopia, with a high nutritional content of carbohydrates, protein, vitamin C, vitamin A, zinc, iron, and minerals. It is a source of cash for most smallholder farmers in Ethiopia and plays a significant role in ensuring food security in the months of harvest, August to October, when people usually suffer from lack of food to meet their necessary calories and nutritional requirements due to the rainy season.  In contrast to other crops, harvesting potato is easier in the rainy season, when it is difficult to harvest other crops, so it is a good add-on. 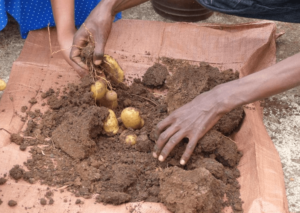 The major challenges of potato production in Ethiopia

In Ethiopia, the lack of access to new potato seeds is frequently coined by many stakeholders in the sector. Farmers continue to use degenerated seeds, and yields are declining year after year. Smallholder farmers are finding it increasingly difficult to access new and improved seed varieties.

Lack of coordination and cooperation between actors, less government attention for the subsector, and the lack of incentives to invest in this were all mentioned by stakeholders as contributions to an unfavorable environment for the potato seed sector to develop itself.

The STARS program was engaged in the potato value chain because it is an important crop for many smallholder farmers in the country. Farmers and their cooperatives faced a lack of access to markets and price fluctuations. We documented stories of people having to dump their potatoes. This problem was, however, twofold: Firstly, using potato seeds of older generations does not benefit the quality of the product, especially when diseases start to appear as well, and this makes it harder to sell the potatoes to the market. Secondly, we realized that there is an inadequate supply of new seeds for the varieties the farmers prefer, especially the Gudene variety. We quickly realized that government-led initiatives to avail new seeds were admirable but not nearly sufficient to serve all the needs. More concretely, these government-led initiatives were not reaching the farmers we were supporting in Jeldu district. We were therefore keen to design and support a private sector-led solution to avail new seeds. 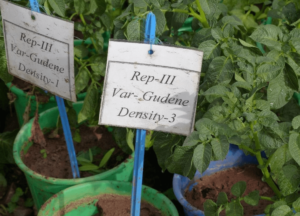 Mr. Tadesse, Producer Organization’s Representative and farmer from Chilanko, Jeldu district, said, “The quality seed problem is a massive challenge in our district, and we have been planting old seeds repeatedly. It has been more than eight years since we got new seed varieties. We have reported our problem to all responsible bodies, but we could not get any new seeds yet. At the last event on access to improved potato seed, we could meet most of them and speak about our problems. But according to the answer we got from Holeta Agricultural Research Institute, they have no budget and land for the propagation of the seed and getting new and quality seeds take many years. On the other hand, Oromia Seed Enterprise told us they knew nothing about the farmers’ demand for quality seed, but they have land and budget to help out the farmers.”

To make sure potato farmers get better access to high-quality potato seeds, STARS facilitated a partnership in December 2019 between the Amhara Rural Agricultural Research Institute (ARARI)and the laboratory WAGINOS. The partnership marked a milestone for forming a private-oriented input supply chain system in the sub-sector. WAGINOS is a private laboratory that engages in the potato plantlet production services for the potato value chain and ARARI is a public research institute founded to improve the livelihoods of smallholder farmers and ensure food security for rural households. In this case, ARARI conducts research and develops genetic materials (potato tissue culture). STARS provided support by facilitating and mediating the partnership to improve the potato value chain.

Despite the great initiation to improve potato seed quality and increase its production, WAGINOS improved its laboratory to fit for the seed propagation process. This was needed because  of the equipment in use was outdated. STARS provided technical support and capacitated the laboratories of WAGINOS and ARARI.

Mrs. Dina, the owner of WAGINOS Biotechnology, said, “I am so happy that ICCO’s STARS initiated this partnership to support and evolve the potato value chain. STARS supported by providing very efficient and automated equipment which helped me produce and deliver better quality potato plantlets. In the future, the partnership and investment will bring a better and a higher return for both WAGINOS and the farmers.“

After STARS invested in the WAGINOS laboratory advancement, they were able to produce 40,000 potato plantlets in a different propagation cycles that follow critical steps, which helps farmers get a better quality variety of seed that increases productivity.  In the first round, 10,000 plantlets were produced and distributed to private seed farmers.

In addition, STARS collaborated with ICCO’s Civic Engagement Alliance (CEA) program to bring together all stakeholders, including ARARI and WAGINOS, to hold a dialogue/lobby for better access to improved potato seed in two different national and regional events in 2019 and 2020.

The events, at the regional and national level, opened a stage for farmers to dialogue/lobby with many stakeholders about access to improved potato seeds. The Oromia Seed Enterprise (OSE) attended the workshop, and it was here that they heard for the first time about the potato seed problems. They took the problem seriously and committed themselves to produce seed potatoes. After the event, STARS collected demand from 9 Producer Organizations in the Jeldu ,Walmara and Adea Berga districts and reported it to OSE. After the events, OSE got 20 quintal seeds from Haramaya University and propagated them and distributed them to farmers, after the seed potatoes matured.

Farmers in the Jeldu district also received 52 quintals of Gudene seed variety from a private seed producer named Solagrow in 2021 and distributed it among three farmers primary cooperatives in the area. STARS also facilitated the creation of a linkage between WASASA Microfinance and farmers in Walmara district, enabling them to obtain loans for potato production. WASASA gained confidence in working with potato farmers in Walmara district because STARS facilitated access to improved seed potatoes and markets for those farmers.

Mrs. Ayantu from Producer Organizations of Jeldu district said: “In our village, we have received 16 quintals of Gudene variety. Now we are preparing our land to multiply it. I am confident to say this variety will bring us more productivity and quality than the old seeds. When our productivity increases, we can sell more because our farmers highly demand these new seeds. The return we will get from this is high and will impact and change our economy and lifestyle. I believe we will earn more income that can improve or at least settle our family’s and children’s life.”

The Strengthening Africa Rural Smallholders (STARS) Program is a five-year program (2017-2021) implemented by ICCO Cooperation in partnership with the Mastercard Foundation. Adopting the market systems development approach, STARS improves access to finance and markets for over 200,000 smallholder farmers with emphasis on women and youth in Burkina Faso, Ethiopia, Rwanda, and Senegal. STARS (Strengthening Africa Rural Smallholders) project in Ethiopia, operating in the Jeldu area and West Arsi zone to support smallholder farmers engaging in potato and malt barley production.