Wara Gonzales is sub coordinator for Manq’a, the gastronomy schools which ICCO runs together with Melting Pot Bolivia. She is in charge of managing the Manq’a schools in Bolivia. We asked her 5 questions about the importance of women within the Manq’a project. 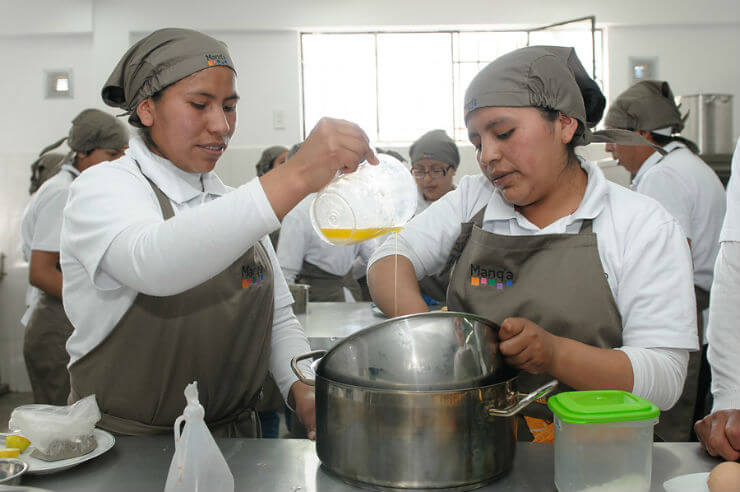 1. Why is it important to adopt a gender lens in development projects?

“Every development project needs to adopt a gender lens. In Manq’a specifically, we support women that come from underdeveloped areas. They origin from rural areas and moved to the cities, where they face a double discrimination: they cannot find proper jobs and they cannot access education. With Manq’a we try to reach these women by giving them the opportunity to start an education in gastronomy and entrepreneurship. We are quite successful in that: 70% of the youth trained within Manq’a are women. That’s something we are proud of!”

2. In which way does Manq’a pay attention to women?

“You should know that in Latin America, the kitchen is mainly a women’s area. Women are expected to cook for their families. So we have an important task to make men understand that the kitchen is not only a women’s area, also men can cook. Furthermore, we are working hard to make people understand that cooking is not only a household thing, but instead an opportunity to earn money, to start entrepreneuring. It’s not only about cooking nice meals, gastronomy can really open doors in terms of jobs and entrepreneurship”.

3. Which constraints do women in Bolivia face?

“Many women are expected to care for their families, that’s their main job. As a result many young women are not allowed to leave the house. Parents are very protective about their daughters, they are afraid that their daughter for example meets someone or becomes pregnant without knowing that other person. What Manq’a does in order to convince the parents that a daughter can enroll safely in a Manq’a school, is organizing meetings in which the parents get to know the school. Then they can see with their own eyes that it is a great initiative and a safe place for their daughters with great opportunities”.

“Another problem is that for women it is hard to find a job with a fair payment. It’s even harder for women with children of whom they should take care of. Manq’a therefore negotiates with employers and try to make them understand that fair payment is very important. What we often see is that employers mainly want to hire men to cook. We try to convince them that women can do the same job, for the same payment of course. We have alliances with restaurants and the private sector to generate the same opportunities for women”.

4. What is the most inspiring woman you met during your work and why?

“Actually, there are four profiles of women which inspire me. First of all, I’m very much inspired by the women who have children. Within Manq’a, we have a lot of mothers who take their kids to school. I like it that they just bring their kids along and that it doesn’t stop them from pursuing their ambitions. Secondly, I’m also inspired by all the young women who are not afraid to start working in an area which they never met before. I’ve seen with my own eyes how they have grown and what they’ve achieved. Some of them are now head chefs is very good restaurants! Thirdly, there is this young woman from a rural area which came to the city but her parents didn’t want her to study. In enrolled in Manq’a and she became one of the best students. She is now a successful barista. And last but not least, I’m also inspired by my co workers of the Manq’a team”.

5. What is your wish for the future of women?

“My wish is to have an equal society for women and men. Not only in working terms, but in general. It is a fact that we’ve been fighting for a long time for equal rights, and we will not stop working for that”.

Manq’a started in 2013 in Bolivia. ICCO Cooperation and Melting Pot Bolivia brought together producers, food processors and consumers to train 3,000 disadvantaged young people as chefs, using only local, organic ingredients. Since then Manq’a has grown fast and nowadays it counts 15 schools in Bolivia and 2 in Colombia.

Manq’a means “food” in aymara. It is a model for training in gastronomy, which is aimed towards the generation of better life opportunities for youths of scarce resources in Bolivia and victims of the armed conflict in Colombia. It is also a tool for the promotion of sustainable agriculture at fair prices that small farmers develop, and a means for raising awareness in the population regarding the importance of healthy eating, rooted in cultural identity and traditions.