Landless Farmers Need Cash in Hand to Continue Their Production

Landless farmers are most of the time excluded from financial institutions while they need cash in hand to continue their production activities. All they need is flexible financing: a long term loan with low interest. The Civic Engagement Alliance assists these farmers in lobby & advocacy. 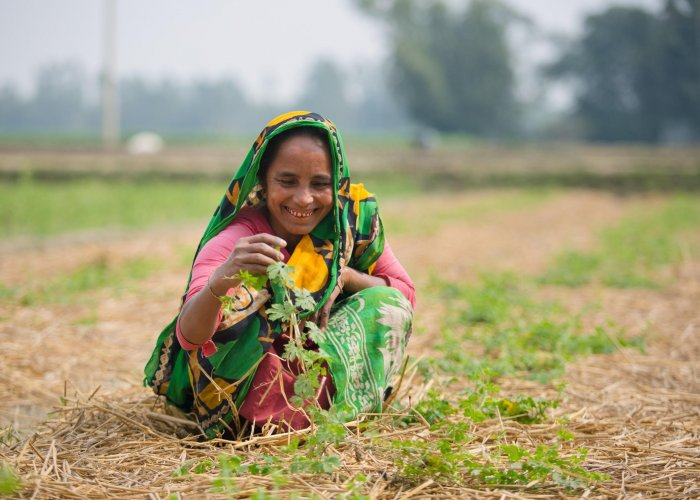 Laili Begum (45) is president of a vegetable producers organization in Shreepur, Bangladesh. She successfully used lobby & advocacy to gain access to financial products from her local bank. Laili and her producers organization organized advocacy workshops with assistance from the Civic Engagement Alliance, a joint collaboration between Dutch and southern civil society organizations with ICCO in the lead, that advocate for inclusive development.

Finance is one of the most important elements that is needed by small producers groups, as well as by registered cooperatives. Small producer groups are often poor farmers and in most instances, they produce agricultural products by taking land on lease from richer landowners, or they are involved in sharecropping. The groups do not have enough cash in hand to invest in production activities.

Therefore they need financial support from external sources. However, smallholders are unable to access formal financial institutions, who often seek collateral for financing. As a result, smallholders are excluded from institutional financing as they do not have assets to provide as collateral. In most cases, they depend on local money lenders to meet their emergency financial needs. There is also lack of financial literacy among the small producers and their representative entities in these remote areas of Bangladesh.

Laili Begum is a member and president of Daxin Somos Kuthipara vegetables producer organization in Shreepur village. She is also an executive member of the Shreepur union federation, which was formed in August 2017. This federation has an executive committee consisting of representatives from 28 producer groups covering different value chains.

As part of the Civic Engagement Alliance, the executive committee organized a workshop with their federation and identified advocacy issues, along with strategies to implement their lobby agenda. They have identified systemic constraints faced by the small producers, including limited or no access to flexible finance suitable for their value chains. Micro-credit is available from microfinance institutions operating in the area, but the problem is that these microfinance loans have high interest rates and installments start from the first week of receiving credit. The producers need long-term finance with low interest rates. To solve this problem, they discussed the issues in their meeting and developed a detailed plan in order to successfully implement their lobby agenda.

Following this plan, the federation has organized a workshop with local public and private stakeholders at district level, in which representatives from trader associations, service provider associations, producer organizations, banks, cooperatives and private companies participated and were made aware of the issues encountered by smallholders. Rajshahi Krishi Unnayan Bank participated in this workshop and shared details about their financial product which might be a feasible option for small producers, which was received with much interest. Later, federation representatives met with the bank authorities several times and as a result of the discussions, Rajshahi Krishi Unnayan Bank sanctioned BDT 20,000 (195,5 EUR) in favor of Laili Begum for potato cultivation. After one year, BDT 2000 interest will be applicable.

Now, other producer organization members are interested to apply for similar loans from Rajshahi Krishi Unnayan Bank. Laili and her federation have paved the way for other smallholders: this is a new window of opportunity for small scale producers as they are empowered to be part of an inclusive market.

Check out the recently launched website civicengagementalliance.org for all updates and stories of change of the program.