Peeling of the Onions of Senegal: Farmer Field School

In a series of 3 articles we highlight ICCOs efforts to improve the productivity of the onion value chain in Senegal. Part 1 zooms in on the farmer field schools, part 2 on a crowdfunding finance product,  and the last article deals with a tool for the mobile market. 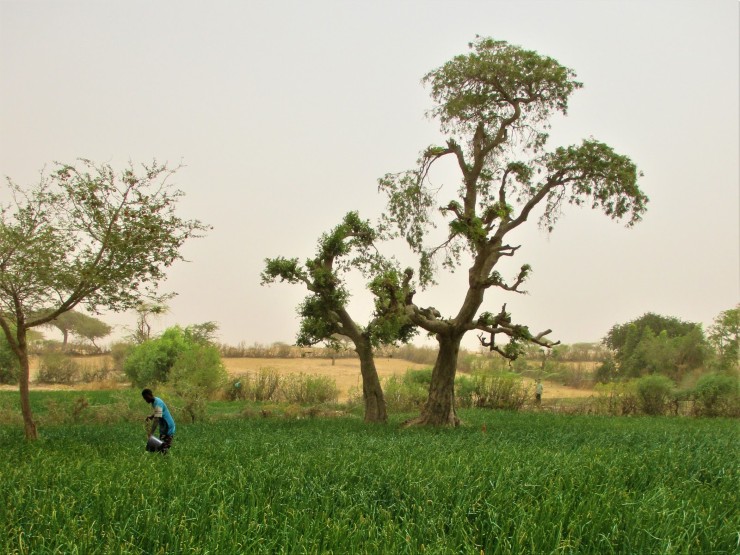 Onions have a prominent place in the Senegalese food consumption and a major impact on the country’s economy. Annually 360,000 tons of onions are produced in Senegal, which is basically enough for the needs of the entire population. However, due to insufficient quality and storage options, part of the onion harvest is lost. Consequently onions have to be imported during a four to five months period (October to February).

The STARS (= Strengthening African Rural Smallholders) program of ICCO, in partnership with the Mastercard Foundation, strengthens the capacity of 8,000 onion smallholders by developing marketing tools and financial products. More productivity and food security for the farmers will support Senegal to become self-sufficient in onion production in the near future.

Salif Sow (59) is one of seven small-scale onion farmers in Rao, a district in the dry, hot north of Senegal, who runs a Farmer Field School. Sow is encouraged by STARS to produce more profitable onion types and is provided with information about innovative production and storage methods.

“In the past, the entire production process was dominated by onion buyers,” Salif Sow says, standing among the rampant onion plants in his field. “They used to come to the villages at the start of the season to sell the farmers seeds on credit. At the end of the season, they picked up the harvest and sold it to traders in the city. It could easily take two to three months before you got your money. As a farmer you were completely dependent, because prices were determined by buyers too.”

In the new situation the local producer organization UGPAR, which Sow and almost a thousand other onion farmers belong to, plays a key role. High-quality seeds, fertilizers and crop protection products are purchased collectively by UGPAR and distributed to its members. The organization works exclusively with input suppliers selected by the STARS program.

Ismaila Ndiaye (29), a young onion producer who, like Sow, runs a Farmer Field School, is aware of the benefits: “By purchasing collectively we get much better input. And what’s more, everything is scheduled on time. The risk of having to delay cultivation is much less now.”

Equally important is the fact that the power of onion buyers is significantly reduced by the intervention of UGPAR. The producer organization buys the harvest from its members and pays them directly. Market prices are carefully monitored. Farmers are encouraged to participate, on condition that the way their crops are grown corresponds with the production method introduced by the STARS program. The main aim of the Farmer Field Schools is to spread this production method to other UGPAR members.

Mamadou Diagne (45) is already convinced: “Salif Sow is my role model. Basically, I do everything he does but then in my own field. I know for sure that the seeds he uses produce much better onions.” Smiling: “And better onions make for a better price.”

A Farmer Field School is not an isolated testing ground, but a model business that contributes to the development of the onion value chain by strengthening the capacity of its producers. Characteristic of the inclusive STARS approach is the intensive cooperation with other actors in the chain. During exchange meetings and training sessions, depending on the phase of the production process, farmers are put into contact with input suppliers, financial service providers and traders. Each of these actors transfers knowledge and information on the smallholders.

Meanwhile Salif Sow, father of six, is looking forward to the future with optimism. His Farmer Field School will most probably produce two to three times as many onions as before the STARS intervention. Sow’s conclusion for the time being: “It is worth learning something new.”