Providing Ethiopian Farmers with Access to Storage and Inputs

STORY | By increasing storage space and ensuring that cooperative members have access to warehouses, cooperatives are able to aggregate their members’ surplus crops for sale to large buyers at more favorable prices. ICCO Cooperation’s program STARS supported seven cooperatives to rehabilitate their warehouses in the past years. 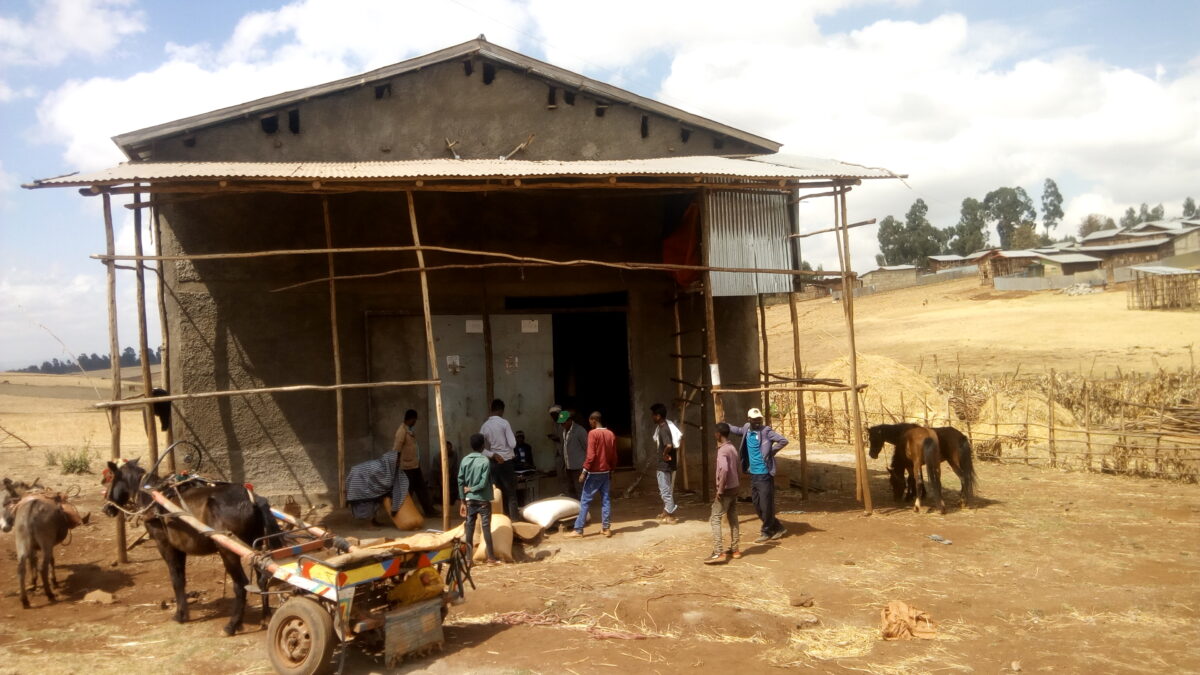 Farmers in the Oromia region in Ethiopia produce large quantities of malt barley. The demand for the crop has increased significantly over the past five years. The number of breweries has increased from three to 12 and their malt barley demand is expected to rise to 200,000 MT by 2020.

Most malt barley farmers are members of a cooperative, which should help them to organize themselves and bargain crop prices collectively. But despite the increasing demand and market value of their crops, farmers and their cooperatives lack the organization capacity to collectively sell to traders. Farmers end up side-selling their crops to local traders individually, without pushing for the best prices. And without the proper means for post-harvest storage, farmers lose a large quantity of their produce.

To help mitigate these challenges, the STARS team of ICCO Cooperation in Ethiopia supported seven cooperatives and its members to rehabilitate seven warehouses for their members last year. The warehouses have a capacity of 300 metric tonnes each, which is the same as 7,5 trucks filled with bags. STARS paid 50 per cent of the rehabilitation costs, the producer organizations invested the other half. The cost sharing principle enhances producer organization’s ownership and the sustainability of the warehouse.

Thanks to the combination of high-quality inputs, agricultural training and post harvest storage management, the producer organizations were able to sell 2,375 tonnes of malt barley to the Asela Malt Factory this year, a cooperative-owned factory that produces beer.

Before the warehouses opened last year, producer organizations such as Jamo Galama struggled to get inputs in the hands of their members. The warehouses not only help them to collect and store harvest; it will also make it easier for the cooperatives to buy inputs such as seeds, fertilizer and pesticides in bulk and offer them to their members on credit from their producer union, well in time for the planting season.

“In the past, farmers had to travel 3-4 hours on foot in search of inputs and markets, risking theft along the way. Thanks to the rehabilitation of the warehouse, more farmers became members of our cooperative, which enhanced the visibility of the producer organization and its acceptance among community members. On average, up to 2000 quintals of fertilizer is annually distributed for both rain-fed and irrigation based agricultural production,” Abdulkadir Dadafo, chairperson of the Jamo Galama cooperative tells.

A positive side-effect is that producer organizations could use their warehouses as collateral to apply for so-called warehouse loans. This is a secured lending technique that allows farmers to access loans secured by their own commodities deposited in warehouses, enabling them to manage the timing of the sale of their crops. It is especially beneficial for farmers and small- and medium-sized businesses, which are often unable to secure financing due to lack of sufficient conventional loan collateral.

“By bringing their surplus to the warehouse, farmers would automatically be able to reimburse their loans and get paid a profit once the producer organization sells their crops,” Debela Mosisa Hambissa, STARS Value Chain Advisor in Ethiopia explains.

The biggest advantage of having a warehouse loan is that producer organization will have the freedom to keep the produce until the prices at the market hit their peak. “We also expect that this will reduce side-selling of our members,” Debela Mosisa adds.

“Our goal is to develop new finance opportunities for farmers,” Faji Tujuba, STARS microfinance advisor tells. “Developing alternatives for agricultural financing would allow farmers to get linked to growing markets, such as the malt barley.”

The Strengthening African Rural Smallholders (STARS) program is a five-year program (2017-2021) implemented by ICCO Cooperation in partnership with Mastercard Foundation. Adopting the market systems development approach, STARS improves access to finance and markets for over 200,000 smallholder farmers with emphasis on women and youth in Burkina Faso, Ethiopia, Rwanda and Senegal.