Students from Manq’a, ICCO’s project in which young people are trained as chefs, catered at the ‘Feeding the Cities’ symposium in Bogota on November 29th, which was organized during the Dutch trade mission of government and businesses. Dutch Prime Minister Rutte, Dutch Minister of Agriculture Schouten and the Colombian Minister of Agriculture Valencia were present. ICCO’s regional manager for Latin America Conny Toornstra told about the importance of gastronomy for small farmers. 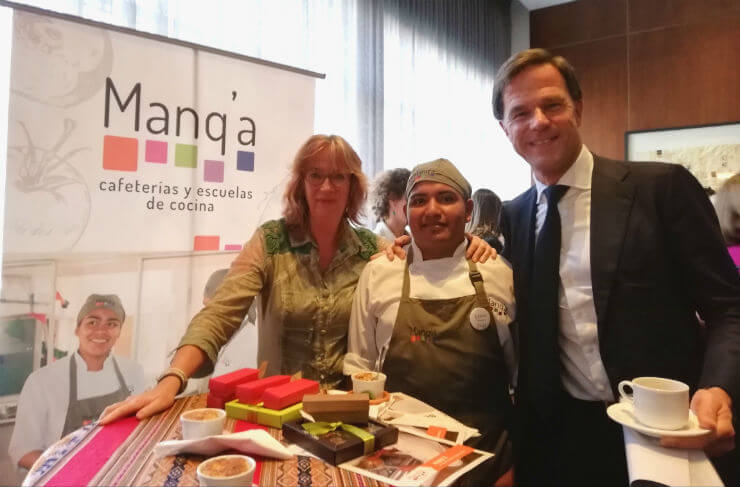 An important topic at the symposium Feeding the Cities was to improve the lives of small farmers who play an important role in the food supply of the growing cities. To this end, farmers need better access to local markets.

The Manq’a project, an initiative of ICCO and Melting Pot Bolivia, contributes to this. In Manq’a young people learn to cook with exclusively local organic ingredients. As a result, the demand for products from small farmers is increasing, thereby assuring farmers of a more stable sales. The rural life is also appreciated more. Young people visit the farmer to see where their healthy food comes from. The gap between farmer, cook and citizen is thus closed. At the moment there are two Manq’a schools in Colombia: in Bogota and Cali.

Manq’a is playing an important role in Colombia’s peace-building process. The protracted conflict has had devastating effects on the country’s youth. Many became dislocated after being forced to move to a safer area. Others fought in the civil war and are now trying to find their way in peacetime. After decades of conflict, rebuilding a harmonious society is a complex process. Cooking and eating together can help: these are activities that bring people together in a way that is conducive to dialogue about the new Colombia, without violence and with a new identity.
At Manq’a schools young people from a wide variety of backgrounds come into contact with each other. Some were active in the conflict and want to rejoin society, others were victims of the violence. The encounters are sometimes tense yet at the same time create a special way to restart dialogue.