Transparency Competition Between Municipalities in Mali

ICCO organized a transparency competition between 180 municipalities in Mali for the third year in a row. The three winning municipalities received a cheque during a ceremony chaired by the Mali Ministry of Sports and Youth. The competition is part of the program for Accountable Local Governance (PGLR). 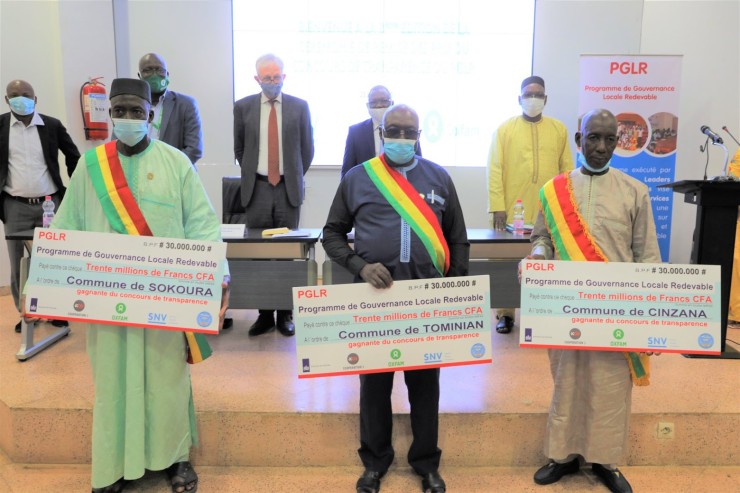 PGLR has initiated an online Transparency Information System that allows elected officials to communicate with their populations on all topics of importance and transparency expected in collective management. This system has an annual transparency competition with three prizes of 30.000.000 FCFA (54.197 US Dollar) for the most transparent municipalities according to the criteria of the system.
This year’s competition was chaired by the Secretary General of the Ministry of Youth and Sports: “PGLR is involved in the implementation of the National Transparency Policy Framework adopted in June 2015. The overall objective of which is to lay the foundation for a culture of transparency in public administration with an aim to achieve open government.”

Pelengana, one of the winning municipalities of the first edition, has used its transparency award to build a maternity and a civil state center. The municipality of Cinzana, which has won the price for the second time this year. Clean water supply was set up in two villages that were facing serious water problems, especially during the rainy season when the water became spoiled and contained earthworms. “Children always had a stomach ache and parents had to spend their little money to buy drugs. But now all this is over”, said Souaîbou Touré, Mayor of the Municipality of Cinzana. 30% of the money was invested in the renovation and equipment of the youth house of Cinzana. This not only allowed the youth of the village to have a room set up for their own activities, but also to generate money by renting the house during village activities.
Again this year, the mayor of Cinzana promised to put the same amount at the service of the youth of his municipality. “We are not giving them the cash, but 30% will be allocated to youth activities.”

Development of a Municipality Depends on Youth

Salif Traoré, responsible for youth issues at the Cinzana town, acknowledged the role of youth in the development of the municipality:
“The development of a municipality depends on its youth. This development is possible only if they are united and conscious of their roles. Before PGLR, there was a lot of discord between the young people of Cinzana. PGLR fostered understanding among young people, good governance and social cohesion in our community. Before young people were marginalized, now they are involved in all our activities. They play an important role in maintaining peace and the development of our municipality”.
“We are very proud to have won this award again this year. PGLR came to implement something that will remain even after the project ends, we will continue to self-assess”, concluded the Mayor of Cinzana.

Since 2012, Mali has been plunged into an unprecedented, serious and multi-dimensional crisis. Through different programs, ICCO helps Mali to support this. PGLR, which started in 2015, is a program that aims to improve the management of local public affairs and contribute to the development of basic social services by mobilizing and strengthening young leaders (men and women).