Women As Drivers of Social Change

Inspiring stories about women who act as drivers of social change.
The project “Women’s Income Generation Support (WINGS)” in Cox’s Bazar, Bangladesh, has supported women in refugee camps and in the host community to set up small businesses. WINGS, supported by the International Organization for Migration, has come to an end. 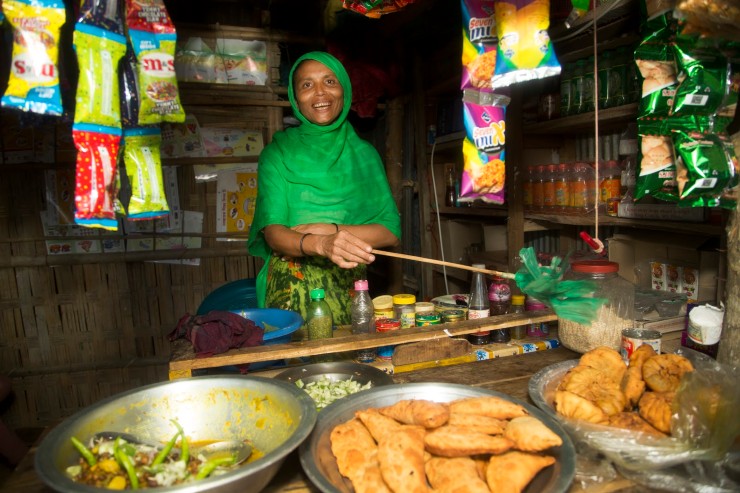 Momtaj Ara – 38 years (photo), fled from Myanmar and came to Bangladesh 12 years ago. She and her family, after being enlisted by UNHCR, got a shelter at Rohingya refugee camp. With the lumpsum amount of money she had with her, Momtaj and her husband set up a small shop adjacent to the camp entrance and they began to sell vegetables. As vegetables are perishable goods, it was a problem for them to store if unsold. This often caused a great deal of loss for them. But, Momtaj and her husband continued doing this as there were 8 children hungry at home. The relief they received was not sufficient to meet the hunger of their children. Besides, Momtaj was worried that they would need some money as the children were growing. They require a good amount of money to get their children married, especially their daughters. As her husband became old and sick, she ran the shop with one of her sons. Until March 2019 Momtaj could not find any other alternative and continued selling vegetables.

But in March 2019, Momtaj got enlisted under the WINGS project where she got training on making fast food. She learnt to make various types of snacks. Momtaj thought this could add a new dimension to her income and livelihood. Slowly she started getting confident about making bulk amounts of fast food daily. In August she decided to stop selling vegetables and start selling fast food. She closed her shop at the entrance of the camp and used a portion of her house to turn into a small shop. Now she sells fast food items along with different snacks like chips. She has set up a corner where she makes the snacks twice every day. She makes 40 pieces of 8 items each and sells them for 5 Taka per piece and earns about 1,600 Taka everyday. It costs her 850 Taka to make these items. With this she has a profit of 800 Taka.

Momtaj says: “Previously, we were not sure of the 3 meals everyday. The vegetables I sold I could not store. Sometimes if they were unsold, I cooked them so that they do not get spoiled. Eating fish and meat was a luxury. But since the past two months things have been different for us. Along with three meals everyday, we can have delicious food like fruits, fish and meat. I am also able to save some money.” Momtaj adds: “I am also teaching this cooking skills to my two daughters. And someday if I can return to Myanmar, I will open a hotel there.” During the training Momtaj received a stove, utensils and 1400 Taka as asset protection allowance. 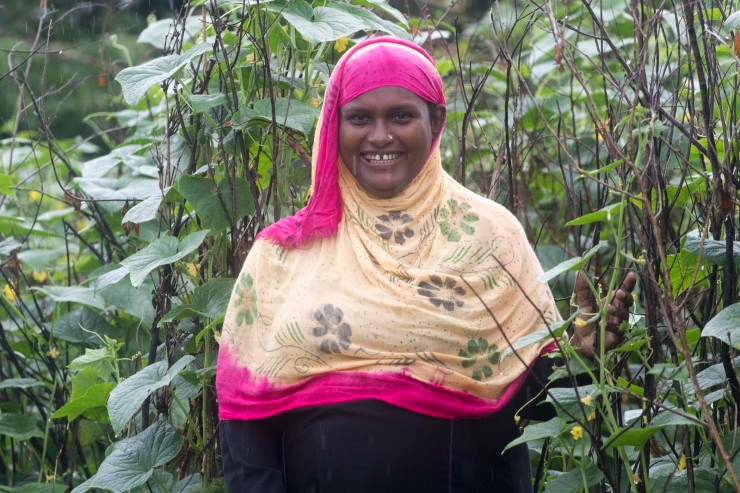 Rashida Begum owns a small piece of land where she cultivates vegetables and rice. It has been eight years that she has been a farmer, but she only followed the traditional ways of cultivation that she learnt from her father and mother. Rashida lives with her spouse and six children in Nhila, Teknaf. Her husband was a day laborer by profession but ever since the Rohingya influx, the wage of the day laborers went down with less availability of work. Hence, he joined Rashida in agricultural activities. They cultivate vegetables and rice divided in three seasons. With the harvest, she mainly targeted family consumption and sold some to her neighbours. Rashida got selected as a beneficiary of WINGS project and received training on smart cultivation techniques and organic fertilizer production.

Rashida says: “Every year when cultivating some of the vegetables, the leaves caught fungus or rot just before the harvest. This led to low yield and low quality production. I assumed it was normal. But after receiving training I realized, it was due to the wrong spraying technique of insecticides and low quality seed I purchased. This year I used better quality seed and used the right spraying technique which I learnt during the training. I was astonished to see that the yield almost tripled and all the leaves were fresh. We earned BDT 25,000 from one season. Previously the number would be around BDT 8,000 to 10,000. With this added income my children can have better food and I can send my children to school”.

Fatema Begum: “The goats are my assets and they will help me earn” 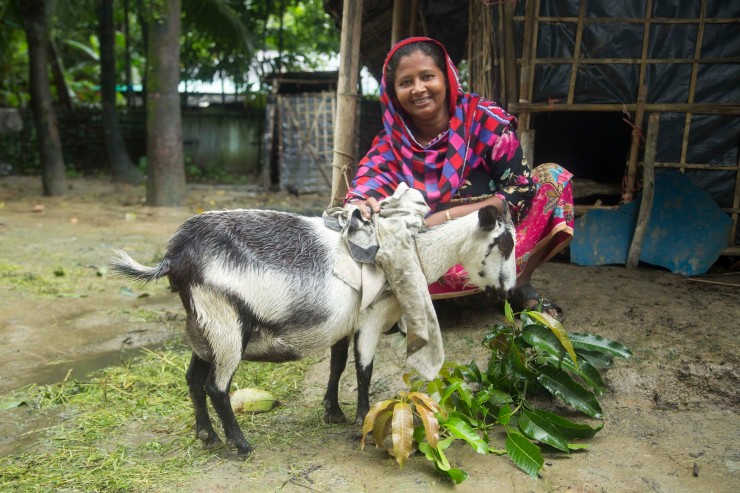 Fatema Begum got married when she was 15 years old. Now, she is 38 and mother of a 22-year old daughter. All that worries her is getting her daughter married. Fatema knows she needs to have a handsome amount for her daughter’s wedding. She lives in a village of Nhila, Teknaf with her daughter and husband. Her husband has always been the main source of income in the family. He was a fisherman but after the influx of 2017, fishing in Naaf river has been prohibited. Since then he has been working as a day labour with uncertainty of availability of work. Fatema has two cows in lease. Recently, she received training on goat rearing as a beneficiary of the WINGS project. Although Fatema knows the basics of taking care of domestic animals like goats and cows, she has less understanding about the technical knowledge like disease, vaccination and reproduction.

Fatema says: “I did not know about the vaccination and PPR disease. One of my goats died from the same disease. Now I know that I have to give two vaccinations to my goats to protect them from PPR. Through the project we also have good relations with the veterinary. If there is any problem, I can call him and consult.”

As an income generating asset, she received a goat from the project. She plans to multiply and sell them. Fatema says: “My goat is pregnant and will have her kids soon. After they are mature I will sell them. With the money I will save some and buy two more goats and save some for my daughter’s marriage. Then I will not take any cows on lease. Someday, my husband and I will have a small goat farm together.”

After generations of statelessness and marginalization in Rakhine State in Myanmar, extreme violence has forcibly displaced almost 700,000 people across the border towards Bangladesh since August 2017. This influx exceeded the capacity of the host country to provide adequate assistance to the Rohingya, while putting a heavy burden on the host community – an already poor and vulnerable population.

The Women’s Income Generation Support (WINGS) project was ICCO’s and IOM’s special pilot on bolstering resilience of the poor and highly impacted communities through the power of women’s economic and social participation. By targeting both host communities and Rohingya women, this intervention builded social cohesion between the two groups. By acknowledging the vulnerabilities of both groups, and working with them both together in a mixed setting inter community relationships were built up.