Municipalities in Mali are responsible for basic services such as water supply, health care and education. 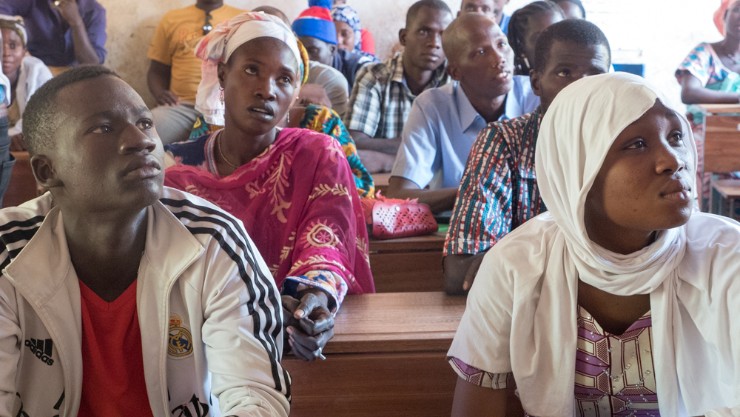 In practice, however, they lack, among other things, the financial resources to establish a firm policy. Furthermore Malians want to get more involved in local governance so that they are really aware of what is going on.

Against this background, ICCO has been implementing the ‘Programme de Gouvernance Locale Redevable’ (P-GLR) since November 2014. In collaboration with Oxfam Novib and SNV, 3,960 young Malians are being trained to play an important role in their municipalities. The program aims to improve local government and basic services.

By reminding municipalities of their accountability, the young leaders contribute to a greater transparency of local policy and its results. Their initiatives strengthen social cohesion in the community and lead to more involvement of other citizens.

Young people with a proactive attitude

Overall, 180 municipalities are involved in the P-GLR project. The program is implemented in four different regions. ICCO is working in sixty municipalities in the regions of Segou and Timbuktu. In each municipality 22 young leaders were selected: eleven men and eleven women with a constructive and proactive attitude, operating on a voluntary basis.

Hamassir Barry (30) from Konobougou, located in the SÃgou region, is one of them. “Instead of criticizing Malian leaders time and again, it’s better to make an effort to change your own environment,” he says firmly.

Bintou Kane (18), also from Konobougou, puts this idea into practice by working together with other young leaders to improve the education system in her municipality. “At one point we ended up at a school with 130 students in one class,” says Kane. “The teachers could not handle the children and did not have proper teaching materials. We informed the mayor and went back to the same school as him. We wanted him to see for himself what the situation was like. He is now looking for funding to build new classrooms and hire more teachers.”

According to Fatoumata Koata (30), the initiative of the young leaders are highly appreciated by the local administrators. “Their input is certainly not seen as interference,” she says. In the recent past, Koata was a young leader herself, but due to a remarkably good performance – she organized a comprehensive event in her municipality about the role of women in local development – she has joined the P-GLR program as a consultant. She maintains contacts with young leaders in five different municipalities and provides training as well.

In the beginning, Koata did not have an easy time. As an unmarried woman, she worked a lot with young men. Due to the gossip that resulted, her reputation was at stake. However, the situation has now improved and Koata has become a role model within her community. With pride: “Now young people say they want to be just like me.”

According to Fatoumata Koata, the added value of the P-GLR project lies in the fact that young people are involved in municipal development through political participation. Before the intervention of the program there was hardly any contact with the local government, but nowadays the doors to the town halls are literally open. Young leaders discuss all sorts of problems with mayors and other civil servants and contribute their ideas in order to find solutions. In this way they help to shape the future of their own community. As Boubacar Sidiki Djenepo, mayor of Konobougou, puts it: “Today’s young people are tomorrow’s governors.”

The P-GLR program employs various indicators to determine the effectiveness of the interventions. These indicators range from “transparent municipal councils” and “mutual trust between authorities and youth” to “an increase in the number of prenatal consultations” and “the percentage of functioning drinking water outlets in a municipality”.

An interim evaluation from June 2017 has provided evidence that the P-GLR program is effective. An ICCO project report from March 2019 has given a positive response for almost all indicators as well. The strong commitment of the selected young people is crucial for the success of the program: the abovementioned report shows that of the 1,320 young leaders from the Sagou and Timbuktu region, 1,294 were active in the second half of 2018.

In the municipality of Cinzana (Sagou region), major changes have been brought about through the intervention of the P-GLR project. Mayor Souabou Toura is more than pleased with the input of the young leaders. “You can’t pick up a pencil with one finger,” he says philosophically.

Like many other mayors, Toura had to face the recurring problem of tax collection. Many Malian citizens do not pay taxes, because they are not convinced that the money will be spent correctly. Young leaders work on this issue: on the one hand providing information about the necessity of paying taxes and on the other insisting that the municipality takes its accountability seriously by providing insight into its budget in public meetings.

Oumou Djira (24), a young leader who makes herself a living by selling clothing and cosmetics, has developed a passion for transmitting municipal information: “In order to raise awareness among the general public I have discussed the tax problem on the local radio station several times. We made a play about the subject too. The municipality should keep the public informed of its policy and its financial management. Young Leaders help to realize this.”

In 2018 Cinzana achieved a score of 84% on the P-GLR criteria for good governance and transparency. The municipality is a model for local governance now. After the information campaign set up by young leaders, the 44,000 inhabitants, who live in 72 different villages, paid 5,775,000 CFA (8,804 Euro) taxes. The time before that, an amount of only 3,150,000 CFA (4,802 Euro) was collected. The additional revenue is used to implement the municipal development plan. Mayor Toura: “Women have to give birth in rooms illuminated by a flashlight. By purchasing solar panels, electricity can be generated at any health care center.”

Oumou Djira is pleased with the results achieved: “The input of young people has created more social cohesion and solidarity in Cinzana.”