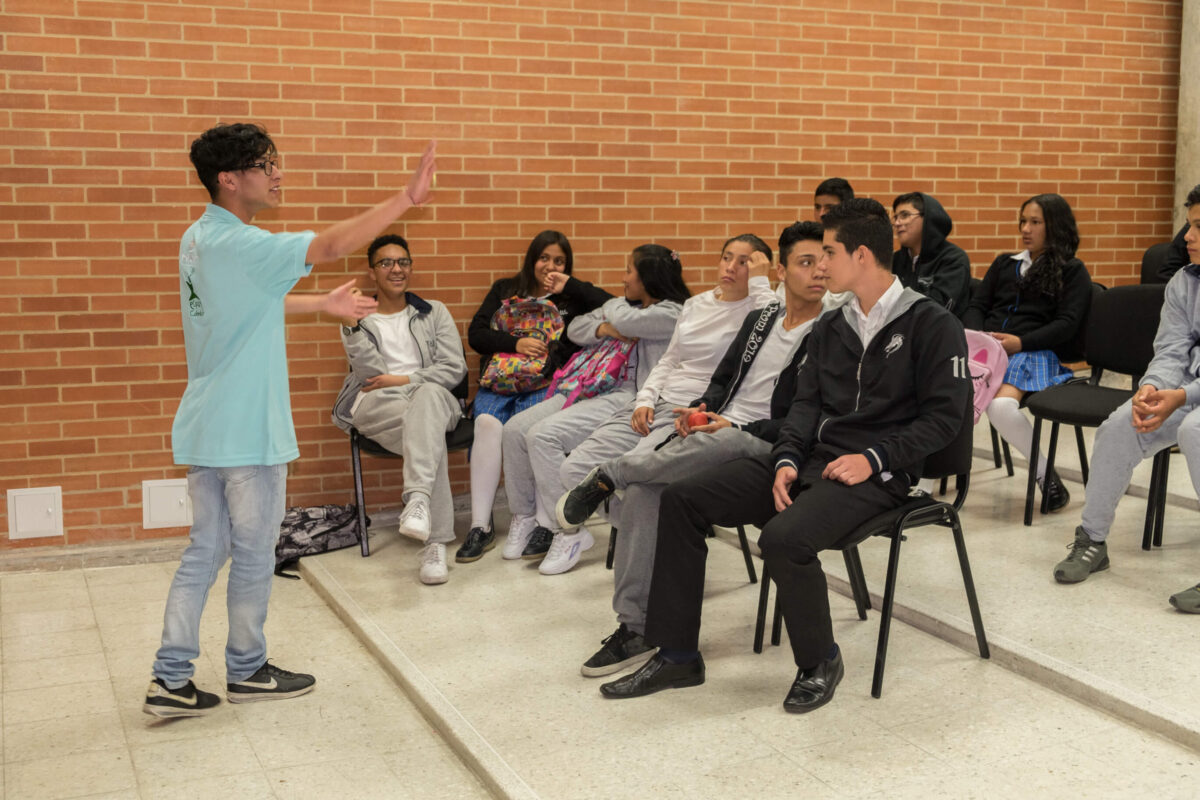 ‘I know many children who only eat something at school, sometimes nothing more than a little snack’. Speaking is 19-year-old Wilian from Colombia. Together with his two sisters, his mother and their dog, he lives in the capital Bogota. ‘So, if there is even a small opportunity to earn money somewhere, many children and young people go for it. Even if they have to take off their clothes. Often, they know that this is not normal, but the prospect of money encourages them do so’. According to Wilian, online contacts between older men and boys are commonplace, for example via Facebook and Instagram. ‘There is also a lot of gossip about sex. Many young people do not realize that they are victims of sexual exploitation or grooming.

Wilian sees what is going on in his environment and he would like to use his talent to improve the situation. ‘I can clearly see that there are several social problems that are interrelated. Social inequality leads to vulnerability and human rights violations. I have been a talker from a young age, and I like to immerse myself in things. I’ve always said I want to make a difference and now as a youth leader I can.”

As a youth leader, Wilian identifies, warns, and teaches young people to recognize situations of sexual exploitation. ‘Our society is steeped in sexism. As a youth leader I advocate against that. I want to break stereotypes.” Wilian therefore made a photo project about transgenders – a target group with an increased risk of sexual exploitation in Colombia. ‘You don’t have to treat someone differently because they look different. As a youth leader I teach other children and youth how to set their boundaries and what rights they have. I dare to speak out about this and inspire others to do the right thing. This is just the beginning!’

Youth Voices for Change is an initiative of the Down To Zero Alliance, targeting to uniting voices and opening spaces for young people to speak out, question and share their messages to prevent the sexual exploitation of children and adolescents in Latin America and Asia.

Wilian is part of Youth Voices for Change in Colombia. He developed a photo reportage and, together with other young people, became one of the youth leaders. Through the program, he strengthened his advocacy skills, mainly on digital platforms, to promote campaigns to prevent sexual exploitation of children and adolescents in Latin America and Asia.

Down to Zero Alliance

The Down to Zero Alliance, in partnership with the Dutch Ministry of Foreign Affairs, is working to eliminate sexual exploitation in 12 countries. In this program, young leaders are the key to change. Children and youth from Indonesia, Thailand, Colombia, India and the Dominican Republic have been made aware of their sexual rights and health by peers and mobilized to take action against sexual exploitation.

In addition, the alliance supports communities so they can better protect their children from sexual exploitation; governments receive assistance in improving and implementing relevant policies and laws and regulations; and Down to Zero works with the private sector in order to combat and prevent the sexual exploitation of children in the tourism sector.